Big machines with giant fans suck in atmospheric air, scrub the CO2 from it, and bury the CO2 forever. It may sound futuristic, but the technology is real. Called “direct air capture,” it would function as an air filter for planet Earth, removing the most common greenhouse gas from the atmosphere.

But as good as it sounds, it probably won’t solve our CO2 problem yet. The energy costs, and therefore dollar costs, are still too high, and the amount of CO2 removed is still too small.

A new startup in Germany has a solution: Instead of sucking atmospheric CO2 from a grounded station, why not strap it to balloons and float it into the atmosphere, where nature can do most of the work?

The project: The startup High Hopes aims to capture CO2 from more than 50,000 feet. It has already launched several innovative balloons into the atmosphere and hopes to send more later this year.

The idea is that the air is cool enough at very high altitudes that CO2 more easily begins to transform into dry ice. It only needs a little extra cooling power, which High Hopes provides with floating air compressors, to fully transform the high altitude CO2 into dry ice. Then, CO2 snowflakes can be stored in a vessel and transported back to Earth, where they are buried or stored permanently.

Cooling the air to -109 F, the temperature required for dry ice to form, takes a lot of energy. But, by sending the airborne compressors to where the air is naturally much cooler, High Hopes reduces the energy requirements.

“If you look at the numbers, a huge part of it is energy,” Eran Oren, chief scientist at High Hopes, told Fast Company. “So it makes sense to think of this problem as, how can I constrain the amount of energy needed per metric ton of carbon dioxide that I capture?”

The machines are about the size of two regular refrigerators. Each one will float for 8-10 hours, return to Earth to unload the captured CO2 at a ground station, then head back to the sky to do it all again.

Will it help? There is a broad agreement, even from proponents of direct air capture, that it is only one piece of the solution. We will need to reduce emissions, utilize biological drawdown techniques (like supertrees that store large amounts of carbon or offshore kelp farms), and design policy to help us reach our decarbonization goals.

However, almost all scenarios for meeting the most ambitious climate targets will require removing CO2 from the air, one way or another.

“The global climate crisis is only getting worse, and we must act quickly,” Oren told Power Engineering International. “By making this adjustment — putting the technology in the sky — we have the ability to undo our carbon footprint.”

Oren, reports Fast Company, says that one balloon can capture one metric ton of CO2 each day, but it costs less than half other ground-based direct air capture technology. But the U.S. Energy Information Administration estimated that in 2019, the global emissions of energy-related carbon dioxide reached 33.1 billion metric tons in one year. At that rate, it would take a whole lot of balloons to keep up. 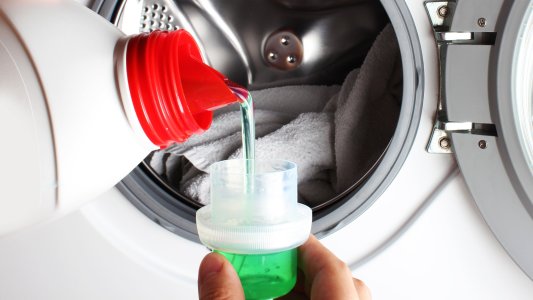 Sustainability
This laundry detergent is made from recycled carbon
Subscribe to Freethink for more great stories
Subscription Center
Sections
Video
Freethink
Subscribe
We focus on solutions: the smartest people, the biggest ideas, and the most ground breaking technology shaping our future.
Subscribe