To avoid the most severe climate change, many experts say we need to do more than just decrease carbon emissions — we need to remove and store a lot of the carbon dioxide that’s already in the atmosphere and oceans.

To do that, we would need a cost-effective, scalable direct carbon capture technology — and now, SpaceX and Tesla CEO Elon Musk is offering $100 million for the creation of such tech through a new XPrize competition.

What Is Direct Carbon Capture Technology?

Carbon capture isn’t a new idea — today, nearly 400 carbon capture projects are either operational or in development across the globe.

However, most of those projects capture carbon emissions directly from factory smokestacks before they’re released into the environment. Direct carbon capture technology sucks up carbon that’s already in the atmosphere or water.

In either instance, the carbon can then be reused or stored underground, but direct capture is very difficult to do cost-effectively.

Across the globe, there are only about 15 plants that focus on direct carbon capture, and they pull less than 10,000 tons of carbon dioxide out of the atmosphere every year.

The newly announced XPrize could help bridge the gap between where we are now and where we want to be.

In 1994, entrepreneur Peter Diamandis offered $10 million to any non-governmental group that could develop and launch a crewed vehicle into space twice within two weeks.

That became the basis for the XPrize Foundation, a non-profit organization that hosts global competitions that offer massive monetary awards for solutions to equally massive problems, such as global food insecurity, rainforest destruction, and unequal access to education.

This is not a theoretical competition. We want teams that will build real systems.

The competitions are typically sponsored by a company or organization, but Musk is putting up the prize money for the latest Xprize competition — the biggest ever — himself.

The full details on the four-year-long competition will be announced on April 22, but so far, we know that entrants will need to demonstrate a direct carbon capture technology that can pull a ton of CO2 from the atmosphere or oceans in a single day.

They must also demonstrate how their tech could be economically scaled up to the gigaton levels and provide details on how long the carbon could be stored (the judges are hoping for a minimum storage time of 100 years).

Eighteen months into the competition, judges will award 15 promising teams $1 million each. Twenty-five student teams will each receive $200,000 in scholarship money.

At the end of the competition, the first, second, and third place teams will receive $50 million, $20 million, and $10 million, respectively.

“The ultimate goal is scalable carbon extraction that is measured based on the ‘fully considered cost per ton’ which includes the environmental impact,” Musk said in a press release.

“This is not a theoretical competition,” he continued. “We want teams that will build real systems that can make a measurable impact and scale to a gigaton level.” 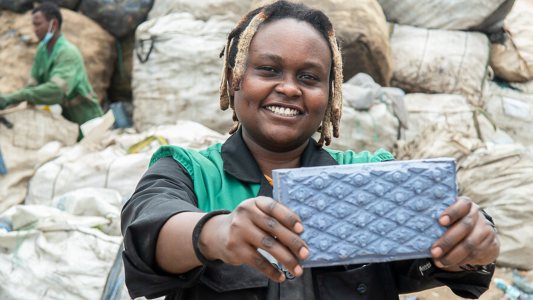 Kenyan startup Gjenge Makers turns plastic waste into plastic bricks that are stronger, lighter, and cheaper than their concrete counterparts.