Google is angling to make Android phones into the world’s largest earthquake detector, using the same accelerometer that rotates your screen (or, often as not, frustratingly refuses to rotate it).

“All smartphones come with tiny accelerometers that can sense signals that indicate an earthquake might be happening,” Google said in the earthquake detector’s announcement.

“If the phone detects something that it thinks may be an earthquake, it sends a signal to our earthquake detection server, along with a coarse location of where the shaking occurred.”

Google will use city-level location data to establish the location. Then, if many phones in the same area are going off, the Android Earthquake Alerts System will in the future send out the titular alerts, hopefully buying people precious seconds or minutes to find a safe place to shelter in the shaking.

“We’re essentially racing the speed of light (which is roughly the speed at which signals from a phone travel) against the speed of an earthquake,” the announcement said.

The accelerometer inside a smartphone is sensitive enough to detect two types of earthquake waves — most importantly, the P wave (primary wave). P waves are the harbingers; they are followed by S (secondary) waves, which are often slower but more severe.

“Often people won’t even feel the P wave because it’s just smaller, while the S wave tends to cause a lot more damage,” Marc Stogaitis, principal Android engineer at Google, told The Verge. “The P wave can be something that tells you to prepare for the S wave.”

Smartphones have been made into an earthquake detector before; launched in 2016 by Cal-Berkeley, the MyShake app availed itself of the same features that the more ambitious Android Earthquake Alerts System will utilize.

Here’s the thing though: you had to download the app. By pushing the earthquake detector to all Android phones running 5.0 and up, Google hopes to create a much vaster network.

We’re essentially racing the speed of light (which is roughly the speed at which signals from a phone travel) against the speed of an earthquake.

In California, Google will work with the state’s ShakeAlert system, which utilizes a network of traditional, in ground seismometers to detect earthquakes quickly. The system began a trial for sending out predictive alerts last October.

Initially, the Android earthquake detector will help provide detail on the impacted area; the idea is if you search “earthquake” or “earthquake near me,” Google will be able to give you more granular information. The alert system will next start in California, where the aforementioned seismometer network means they have robust, reliable data.

Eventually, Google hopes its enormous earthquake detector can provide early warnings across states and countries, leveraging the massive power of many monitors at once.

What they will not be able to do — and no one can, or at least not yet — is predict earthquakes.

“The biggest key thing is that the phones that are nearest to the earthquake can help users away from the earthquake know about it,” Stogaitis told The Verge.

“One of the limitations of the system is that we can’t warn all users before an earthquake reaches them. The users closest to the epicenter of the earthquake just aren’t likely to get a warning in time because we’re not predicting earthquakes ahead of time.” 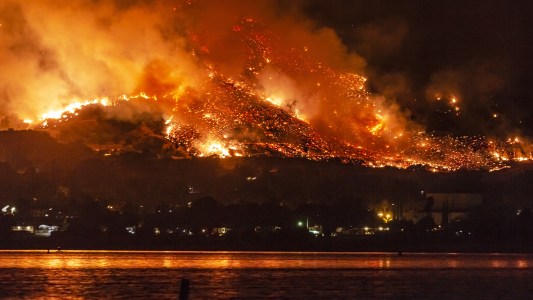 Wildfires need dry fuel to thrive. Researchers at Stanford are working on an AI model to measure dryness to help predict, and control, the blaze.

AI
This model may help predict wildfires
Subscribe to Freethink for more great stories
Subscription Center
Sections
Video
Freethink
Subscribe
We focus on solutions: the smartest people, the biggest ideas, and the most ground breaking technology shaping our future.
Subscribe