Could a little-known plant that resembles the banana help end food insecurity?

That’s what a group of scientists from Wales, Ethiopia and London are asking in a new paper about enset, a perennial banana-like fruit mainly cultivated in southwestern Ethiopia. While the fruit is inedible, the stems and roots can be fermented and made into porridge and bread.

Enset also has several traits that make it suitable for tackling food insecurity: it’s starchy, it grows in a variety of conditions, it is somewhat tolerant of drought and it can be harvested at any time of year.

“High productivity and harvest flexibility enable it to provide a starch staple for around 20 million people,” the researchers say. “Extensive wild distribution suggests that a much larger region may be climatically suitable for cultivation.”

Finding crops that can help bolster food and nutritional security is becoming increasingly important. The number of people in the world affected by hunger increased in 2020 as COVID-19 spread around the globe, and the United Nations says the world “has not been generally progressing” towards its goal of ensuring access to safe, nutritious and sufficient food for all people, all year round.

Of the world’s 768 million undernourished people in 2020, 418 million lived in Asia, 282 million in Africa and 60 million in Latin America and the Caribbean, UN statistics show.

While the pandemic slowed progress towards improving food security, climate change creates another area of vulnerability. Higher temperatures, changing weather patterns and an increase in extreme events affect what crops can be grown successfully in different parts of the world.

That’s where enset comes in, according to the scientists from the School of Natural Sciences at Bangor University in Wales, the Department of Biology at Hawassa University in Ethiopia and the Royal Botanic Gardens at Kew in London. The crop’s broad climate tolerance could enable it to extend well beyond its current reach, and particularly to drier and warmer regions, they say.

They calculate that enset cultivation might prove feasible for an additional 87.2 million to 111.5 million people, not just in Ethiopia, but also in Uganda, Kenya and Rwanda. And while climate change might reduce the crop’s potential range, many areas remain suitable.

Other enset benefits include strong fibres that can be used in construction and leaves that Ethiopian people use for baking bread, and to make roofing and packaging.

Barriers to break down

So why hasn’t enset cultivation expanded already? The report cites two main barriers: firstly, restrictions in Ethiopia on the international transfer of plant material – a rule that’s in place to protect indigenous bio-resources.

Second, the specific knowledge for successful enset cultivation is closely associated with certain cultural groups. The need for fermentation adds another layer of complication, although some people already embrace that practice as part of their food culture.

In addition, the authors cite local dietary preferences as another potential barrier, as well as culture and aspirations.

But all is not lost, with enset offering “significant potential in Ethiopia and beyond”, the researchers write.

While more research is needed on how to spread this wondercrop, starchy cassava offers a successful blueprint with its expansion to Zambia.

Boosting cultivation of underutilized crops offers huge potential to diversify the world’s agricultural systems, and to make them more resilient in the face of climate change, the scientists conclude. 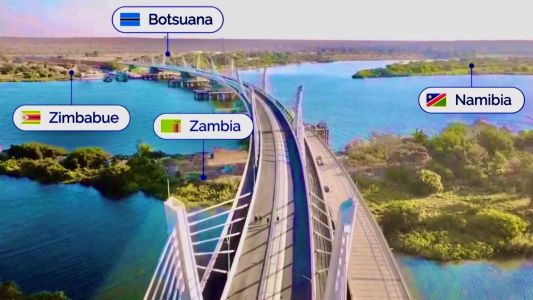 The Kazungula Bridge has turned a cartographic near-miss into a geopolitical marvel, with a chance to renew Africa’s economy.

Global Development
Why Africa’s newest super-bridge is in the continent’s weirdest border zone
Subscribe to Freethink for more great stories
Subscription Center
Sections
Video
Freethink
Subscribe
We focus on solutions: the smartest people, the biggest ideas, and the most ground breaking technology shaping our future.
Subscribe