The world wastes 1.4 billion tons of food per year, which takes a significant toll on the environment. But what if that food waste could become a resource? Researchers in Japan have found a way to use discarded food scraps to create a concrete substitute. Not only does it reduce food waste, but the resulting material is edible and smells pleasantly sweet.

“Our goal was to use seaweed and common food scraps to construct materials that were at least as strong as concrete,” concrete engineer Yuya Sakai told the Good News Network.

“Since we were using edible food waste, we were also interested in determining whether the recycling process impacted the flavor.”

“But since we were using edible food waste, we were also interested in determining whether the recycling process impacted the flavor of the original materials.”

What they did: Kota Machida, a student of Sakai’s, took inspiration from Sakai’s early work, which used a heat pressing method to take recycled concrete and wood powder and press it into construction materials. Instead, they used vacuum-dried food scraps, including orange, cabbage, seaweed, onion, mango, and banana peels.

“I found that a huge amount of food waste is generated in Japan annually, and I thought this is a big issue that we have to solve,” graduate student Kota told Newsweek, adding that this new material is safe to eat but rather crunchy.

The process sounds a lot like baking granola bars. They mix the powdered food scraps with water and press it into a mold at a high temperature (50 to 150 degrees Celsius) to manufacture the material. The result, they say, is four times stronger than concrete.

“Without waterproof treatment, the material can be soft by moisture. So, the material is softened by saliva and becomes chewable,” Sakai said in an email, adding that the material maintains the smell and taste of the original food, but is stronger than concrete and gypsum board.

The team even added seasonings.

“With the exception of the specimen derived from pumpkin, all of the materials exceeded our bending strength target,” Kota told the Good News Network. “We also found that Chinese cabbage leaves, which produced a material over three times stronger than concrete, could be mixed with the weaker pumpkin-based material to provide effective reinforcement.”

Next steps: Already, product manufacturers are interested in the material for creating items such as furniture and boxes. And Sakai says that some companies are trying to use it for interior finishings. But it will require more research and testing before it is an approved building material.

“The bonding mechanism of these materials are not clarified completely yet, so we have to study these and prove them. That will be the next step. We also want to investigate a bigger variety of food scraps,” Sakai told Newsweek.

A strong enough material to construct a building that is tasty and edible — I can only imagine the creative applications.

We’d love to hear from you. If you have a comment about this article or if you have a tip for a future Freethink story, please email us at [email protected] 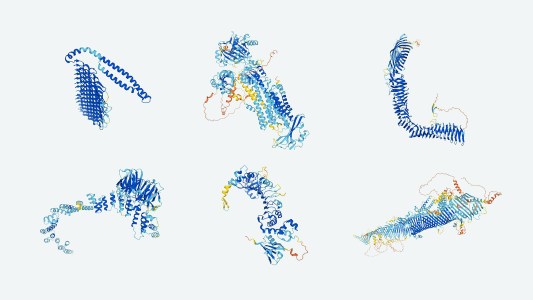