For nearly 80 years, the wreckage of the British submarine HMS Perseus has been a hotspot for marine wildlife, providing turtles, dolphins, and fish with both food and shelter.

But some of those creatures become trapped and die in the lost fishing gear ensnared in the wreckage — so a team of divers set out in July to remove the submarine’s “ghost nets” and make the wreckage safe for animals.

Every year, an estimated 640,000 tons of fishing equipment is lost or abandoned in the world’s oceans and seas. Dubbed “ghost nets,” this gear goes on to kill or maim millions of animals, including several endangered species, every year.

Since its launch in 2013, the Healthy Seas initiative has been fighting this problem by organizing dives to remove ghost nets, and so far, the group has overseen the removal of 510 tons of gear.

For the HMS Perseus mission, Healthy Seas worked with six volunteers from the environmental organization Ghost Diving. Together, they removed more than a half a ton of ghost nets from the sunken submarine and nearby wrecks in the Ionian Sea, between Italy and Greece.

For Healthy Seas, the removal of ghost nets is just the first part of the process, though. The next step is sending any nylon waste on to its founding partner Aquafil.

That multinational company is a leading producer of nylon, and it’s developed a process for transforming nylon waste into an infinitely recyclable yarn it calls “Econyl,” which can be fashioned into everything from swimsuits to furniture.

Some of this yarn then goes to another of Healthy Seas’ founding partners, Star Sock, to be made into sustainable socks. But the material has also been used to make apparel for such major brands as Adidas, Gucci, and Prada.

While Healthy Seas’ efforts to remove ghost nets are helping protect marine wildlife, the initiative can’t remove gear at the same pace it enters the water.

In an attempt to get ahead of the problem, the group launched a new ghost net reporting campaign in July.

Now, when fishers lose a net, they can fill out an online form letting Healthy Seas know about the loss. Those in Greece also have the option of sending the group a text or Facebook message.

Once Healthy Seas receives the report, it will contact volunteer divers to recover the lost equipment — ensuring it doesn’t remain a threat to wildlife for decades, like the ghost nets covering the HMS Perseus did. 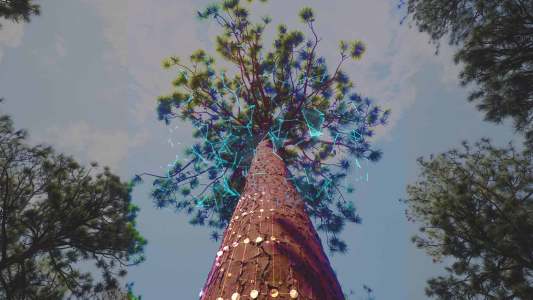 NatureXR, a new collective, is the first to build 3D model trees, then have scientists certify them as “real” for virtual reality.

VR
Building trees in the Metaverse might actually save the forest
By Teresa Carey
Subscribe to Freethink for more great stories
Subscription Center
Sections
Video
Freethink
Subscribe
We focus on solutions: the smartest people, the biggest ideas, and the most ground breaking technology shaping our future.
Subscribe