French insect farming startup Ÿnsect is building the world’s largest insect farm in Amiens, north of Paris. Set to open in fall 2022, per TechCrunch, the facility will focus on raising mealworm beetles — specifically their larvae— for commercial uses, including fertilizer and as food for pets and aquaculture.

The endgame: lowering the carbon footprint of the agricultural sector. (Also, maybe Snowpiercer.)

“We know that with a growing population, and the limited resources we have on Earth, limited arable land, the maximum greenhouse gas emissions that we can afford with climate change, and biodiversity loss, there’s so much to do,” Ÿnsect co-founder, president, and CEO Antoine Hubert told FastCompany.

Beneath the factory’s cavernous ceilings, stacks of mealworm larvae will be grown, with the insect farming made as automated as possible. Robots will handle the rearing and reaping, FastCo reports, while an AI system monitors conditions to ensure the bugs, fed with local crop waste, are happy.

Ÿnsect’s already in partnership with fish food producers, with the most obvious impact being in the fast-growing salmon farming sector — currently 70% of the aquaculture market, according to the World Wildlife Fund — and feeding all those salmon can deplete stocks of the wild fish they feast on.
“Oceans are emptying and fish farms are taking over. We’re approaching 50% of fish coming from fish farms,” Ÿnsect investor Yves Sisteron of Upfront Ventures told TechCrunch.

“One of the main ingredients of fish feed comes from fish. These are from trawlers that rake the bottom of the ocean for anchovies that are combined with a protein paste that is fed to fish for fish farms. And that is basically not sustainable. The amounts in question are gigantic. Globally there’s about 44 million tons of fish feed per year that is fed to farmed fish.”

Feeding those fish mealworms from insect farming can not only limit their ecological impact, but may also be better for the fish.

“They were reaching the maturity stage faster and eating less so they were avoiding a large quantity of feed,” Hubert said. “There was less mortality so the farmers get more fish eventually than before. . . . This also explains why we have a carbon-negative balance, because we are avoiding so many quantities of inputs to feed fish to have the same quantities of fish.”

While lab grown meat is making its way onto menus slowly but surely, it’s nowhere near satisfying the world’s now insatiable appetite for upstream swimmers.

Ÿnsect is currently insect farming at a smaller site, and when the new facility opens, they expect to produce 100,000 tons of mealworm products annually — a fraction of the fish feed needed, but a big start. 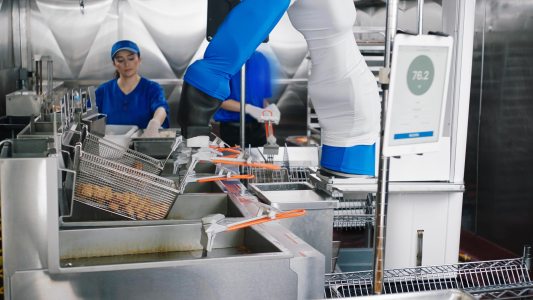