Crop-eating locust swarms are being turned into sustainable feed and fertilizer by Kenyan farmers, with the help of a startup called The Bug Picture.

One of the worst locust invasions in 70 years descended on East Africa in December 2019 and has come back in dramatic waves. Climate change and unusual weather patterns created ideal weather for the locust swarms. Now, clouds of insects are booming as warmer seas bring about heavy rains that wake the dormant eggs and create stronger, more frequent cyclones to disperse the insects.

“They destroy all the crops when they get into the farms. Sometimes they are so many, you cannot tell them apart, which are crops and which are locusts,” said farmer Joseph Mejia, reports the World Economic Forum.

I think we underestimate the human desire to make a difference for ourselves and our neighbors.

The Bug Picture, a local startup, pays Mejia and other farmers in the region to collect the locusts and grind them into a powder. Before the locust invasion, The Bug Picture launched operations in Rwanda and Kenya to support their core for-profit business: farming black soldier fly larvae as a sustainable, locally produced protein source for animal feed.

“They are incredible insects that consume any and all organic waste, which means that we are addressing feeding the future (humans and animals), while contributing to organic waste management challenges (and associated greenhouse gas emissions) in East Africa,” Laura Stanford, founder of The Bug Picture said in an email.

Harvest begins at night when the locusts are sleeping on shrubs and can’t move. They collect, crush and dry the locusts. Then they grind them into a powder, for which The Bug Picture pays 50 Kenyan shillings ($.46) per kilogram. In the first two weeks of February, they collected 1.3 tons of locusts.

“The inspiration for the project came from Pakistan where a similar project was run with great success. And then watching videos of affected communities in northern Kenya who were in absolute despair watching their livelihoods being ripped away, with no call to action, no way for them to contribute to the response,” said Stanford.

Desert locusts are widely regarded as the world’s most destructive insect. When their numbers reach a critical mass, the locusts become crowded and form swarms. They go from a relatively innocuous solitary period to a more sociable phase, reports BBC Future.

The population size snowballs from there — multiplying 20 times in three months. The locust swarms can be as thick as 80 million locusts per square meter. A swarm that size can consume as much food as 35,000 people per day.

In other efforts to combat the locust invasion, NASA is providing satellite data to East Africa countries to help them predict when and where the next locust swarms will hatch. And researchers recently found the hormone that triggers the fast-paced swarms, hoping this new information will help them stop the swarming behavior before it begins.

The Bug Picture turns the threat into an asset. They offer farmers an additional financial incentive to kill and collect the locust swarms. They are simultaneously helping combat the pest problem while earning money and creating useful protein powder for livestock feed or fertilizer. Their work targets only small areas, less than 5 hectares, that are not suitable for spraying.

Stanford says that the locust meal is selling for $0.8 per kilogram, which is below the market level based on the protein, amino acid, and vitamin content.

“We are trying to create hope in a hopeless situation and help these communities alter their perspective to see these insects as a seasonal crop that can be harvested and sold for money,” said Laura Stanford, founder of The Bug Picture.

“The communities have been very interested and easily mobilized for involvement in the project which has been a  wonderful thing to witness. I think we underestimate the human desire to make a difference for ourselves and our neighbors,” she said. 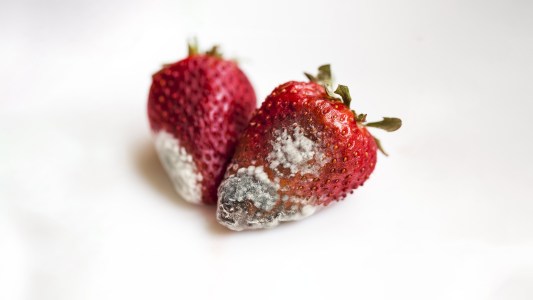 Scientists engineered plants to stop fungus that causes grey mold. This could lead to natural fungicides that protect food crops without toxins.

Agriculture
Plants make their own mini weapon launchers to fight off fungus
By Teresa Carey
Subscribe to Freethink for more great stories
Subscription Center
Sections
Video
Freethink
Subscribe
We focus on solutions: the smartest people, the biggest ideas, and the most ground breaking technology shaping our future.
Subscribe