Scientists have discovered a new mineral that has never been seen before. And, to add to the marvel, the unearthed mineral was trapped inside a diamond.

Since the 1970s, scientists had theorized the existence of this mineral — but now, they have proof. This is “the first time that lower mantle minerals have ever been observed in nature,” according to a press release from the University of Nevada, Las Vega which led the discovery.

Davemaoite has a perovskite crystalline structure that can only be created under extreme pressure and heat, like the conditions found between 660 and 900 kilometers deep, in the Earth’s mantle, which lies between the crust and the core.

This is “the first time that lower mantle minerals have ever been observed in nature.”

If the mineral were to travel to the upper layers of the Earth, it would quickly break down into other minerals. That is why no one has seen it before. But this time, the new mineral was preserved inside a diamond, allowing it to move from deep in the Earth to where humans could find it.

“It’s the strength of the diamond that keeps the inclusions at high pressure,” geochemist Oliver Tschauner, who led the discovery, told Nature.

A diamond in the rough: The green diamond was unearthed from a mine in Botswana decades ago, so the new mineral has been hiding in plain sight ever since. Eventually, it made its way to George Rossman, a mineralogist at the California Institute of Technology in Pasadena. Then Rossman and Tschauner started taking a closer look at the gem a few years ago, blasting it with x-rays to reveal more details about the minerals within — including the presence of the mineral davemaoite.

“It’s the strength of the diamond that keeps the inclusions at high pressure.”

Tschauner named the mineral after Ho-kwang ‘Dave’ Mao, a geologist known for his pioneering work in high-pressure geochemistry. This specific diamond probably formed between 410 and 560 miles beneath the surface of the Earth, making it a “super-deep” diamond. The diamond that captured the mineral particles was robust enough to make it all the way to the surface undamaged, reports Popular Science.

Tschauner’s team from the University of Nevada, Las Vegas, reported the discovery in the journal Science. They say the discovery gives a unique view into deep-Earth chemistry.

“For jewelers and buyers, the size, color, and clarity of a diamond all matter, and inclusions—those black specks that annoy the jeweler—for us, they’re a gift,” Tschauner said in a statement.

Davemaoite is composed mainly of calcium silicate. But it can collect radioactive isotopes that create a lot of heat deep in Earth’s mantle, the layer between the crust and core. That means the mineral is a critical part of how heat moves deep in the Earth, influencing plate tectonics, reports Nature. 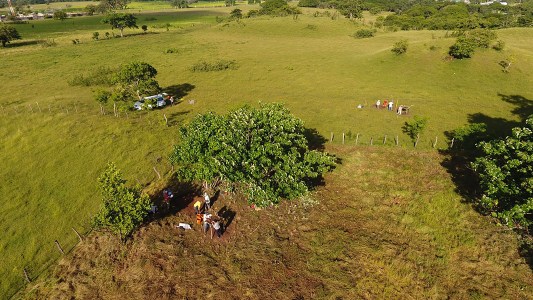 Archaeologists are hunting for — and finding — previously hidden ancient structures in lidar data collected by planes and drones.