There are currently over 7 billion human beings alive on Earth — and in 2050 the world’s population will rise by almost 2 billion. That’s a lot more mouths to feed considering that roughly 11 percent of the world goes hungry today.

To prepare for this future, we’ll need to scale up food production in a sustainable way — without using more land and lowering emissions — and figure out more efficient farming and sustainable food systems that will allow us to get the food we produce to the people who need it most. While this is a huge task-at-hand there are, thankfully, pioneers in the food and agricultural industries who are innovating today to make sure we can feed the planet tomorrow.

“If you want to feed the world in 2050, then in the next 40 years, we need to produce the same amount of food as we did over the last 8,000 years,” says Ernst van den Ende, the Managing Director of Plant Sciences at Wageningen University in the Netherlands. His innovations are helping to propel the small European country into an agricultural powerhouse.

In this Future of Food series, Freethink’s Michael O’Shea goes around the world to introduce us to van den Ende and other pioneers who are working hard to ensure that we can feed our future world. Below are the 3 exciting innovations that we’ll explore in the Future of Food.

“To solve hunger and to feed the world population, we’re going to have to double protein production,” says Sylvia Wulf, CEO of AquaBounty Technologies, but “how are we going to do it without continuing to put pressure on our natural resources?”

One answer to creating sustainable food systems may lie in genetically modified meat. Later this year, AquaBounty will bring the first GMO meat product to U.S. supermarkets. This new type of salmon has been in development since 1989 when an Atlantic salmon was injected with a new piece of DNA, a composite of Chinook salmon growth hormone genes and a gene promoter from an ocean pout. With this genetic addition, the salmon’s growth cycle is sped up, producing market-weight fish in 18 months instead of three years.

Right now, America imports about 330 million pounds of salmon a year, mostly from Chile or Norway. With AquaBounty’s method, we will be able to raise fast-growing salmon in the heartland of America.

Changing the Public’s Perception of Meat

Meat, particularly red meat, is a resource-intensive endeavor that will be hard to scale up as the population rises without doing significant damage to the environment. But what if meat production could be easier and more sustainable? What if it was grown in the lab or sourced from plants? This new phenomenon has taken the world by storm with Impossible Burger and Beyond Burger’s plant-based meats and Memphis Meat‘s lab-grown meat — just to name a few. Restaurants are even getting in on the action. Like the GMO salmon, this is a way to grow protein without using more land and while lowering emissions.

While having the ability to create alternative meat in the first place is a revolutionary step toward feeding the planet in a more sustainable way, an arguably even bigger hurdle will be convincing consumers to change their diet. Consumers usually choose foods based on taste, price, and convenience. Planning ahead for 2050 in a sustainable way is usually not a top priority when strolling down the meat aisle in the local grocery store.

“For people that are very headstrong on continuing to consume meat, it’s important that we make sure that plant-based meat is at the same price levels, as convenient to purchase and cook and eat, and that it tastes just as good,” says Nicole Manu of Good Food Institute.

Scaling The Most Efficient Farming in the World

The Netherlands, known mostly for its windmills and wooden shoes, is the second-largest agricultural exporter in the world, behind the U.S. How is a small, densely populated country able to grow so much food? Their answer lies in “precision farming” (greenhouse technology), which enables them to grow more food with less water and pesticides. The southern region of Westland accounts for the country’s most advanced farming where 80 percent of the farming is under glass. Here they grow almost 154 pounds of tomatoes per square meter.

Just as important as their ability to do more with less, is their desire to share these sustainable farming practices freely.  “I spend a lot of time in informing the general public about what we are doing. And I think that’s quite important for a knowledge institute.  Be transparent about what you do in science and how we can come up with solutions for the big challenges that we face,” says Ernst van den Ende of Wageningen University.  He hopes to export this knowledge abroad.

“If you are an Amsterdam, you forget that there is a food crisis in Africa,” says van den Ende who adds that he travels a lot for his work to learn about local problems on the ground, “I want to work very hard to come up with good opportunities for many people in this world to feed themselves.” 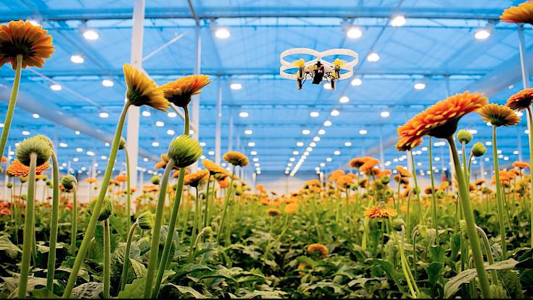 Series|Future of Food
A look inside farms of the future
6:20
Subscribe to Freethink for more great stories
Subscription Center
Sections
Video
Freethink
Subscribe
We focus on solutions: the smartest people, the biggest ideas, and the most ground breaking technology shaping our future.
Subscribe