Habitat loss is currently the biggest reason for modern extinctions. But with climate change, we’re bound to see even more extremes — like massive wildfires and wildly fluctuating temperatures.

As things are expected to worsen, researchers are trying to figure out which species are resilient enough to survive or adapt — and how they do it.

Using genome sequencing, researchers from McGill University have demonstrated that some fish, such as the threespine stickleback, can quickly respond to dramatic seasonal changes.

Why the threespine stickleback? This fish is tiny but has a big personality. It is often the subject of scientific research because it can live in seawater and breed in freshwater.

It defends its territory, shows social behaviors, and even has elaborate breeding behaviors — all qualities that are ideal for answering questions about evolution, population genetics, or physiology.

These genetic changes occurred in independent populations over a single season, highlighting just how quickly the effects of natural selection can be detected.

But what is it about this fish that makes it so tenacious?

Tracing evolution in real-time: In most evolution studies, researchers try to look back and recreate history, guessing how populations adapted to environments of a distant past.

Researchers at McGill University wanted to observe evolution in action. So, using genetic sequencing, researchers followed six species of threespine stickleback fish before and after seasonal changes in their habitat.

They watched the fish in estuaries along coastal California where seasonal variations, such as warm winters and dry summers, cause significant habitat changes, reports Futurity. Only the tough ones, with hearty genes, can survive.

“These changes probably resemble the habitat shifts experienced by stickleback populations when they colonized many newly created freshwater lakes from the ocean after the glaciers receded 10,000 years ago,” Rowan Barrett, chair of biodiversity science at McGill University said. “We hope to gain insight into the genetic changes that may have resulted from natural selection long in the past.”

It is in the threespine stickleback genes: The team found evidence of genetic changes triggered by seasonal habitat alterations, which paralleled the variations seen between freshwater and saltwater populations.

“These genetic changes occurred in independent populations over a single season, highlighting just how quickly the effects of natural selection can be detected,” lead author Alan Garcia-Elfring said.

“The findings are important because they suggest that we may be able to use the genetic differences that evolved in the past as a way to predict how populations may adapt to environmental stressors like climate change in the future.”

Adapting to the future: Studying organisms in dynamic environments allows researchers to gain insight into how animals will fare in a changing environment due to climate change.

In 2019, researchers from the University of California Santa Cruz found a unique species of stony corals ready to withstand climate change. The corals lived near springs, called “ojos,” which discharge acidic water. Like the threespine stickleback, these particular corals had adapted to an environment that constantly saw changes in temperature and salinity.

“This study gives us a better handle on who’s more robust and who’s more sensitive under potential future conditions, so that we can start thinking about what reefs of the future might look like and whether we’re going to protect certain areas,” said biologist Hollie Putnam. 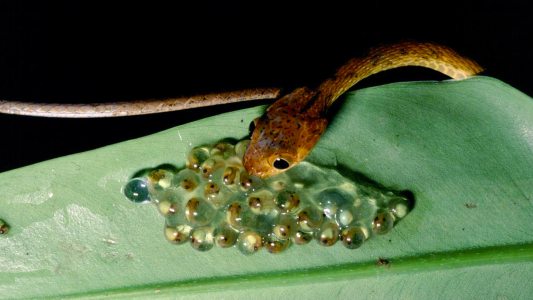 Sound appears to play a larger role in animal development than previously thought, affecting how a variety of species prepare for life outside the womb or egg.

Animals
Birds, frogs, and reptiles use sound to “program” embryos
Subscribe to Freethink for more great stories
Subscription Center
Sections
Video
Freethink
Subscribe
We focus on solutions: the smartest people, the biggest ideas, and the most ground breaking technology shaping our future.
Subscribe