Halfway to heaven, NASA satellites are on a decidedly earthly mission. They are searching for evidence of landslides to add to a global database about these deadly but poorly understood natural disasters. The goal is to model these sudden catastrophes — and, ultimately, predict and prevent them.

“They kill thousands of people each year,” says Dalia Kirschbaum, a landslide researcher with NASA. “They affect millions (of people) and cause billions of dollars of damage. But those numbers are just an order of magnitude, because we really don’t know where and when landslides are happening in any systematic way across the globe.”

Radar and weather satellites track hurricanes; seismometers detect the first rumblings of an earthquake; observation platforms across the Pacific warn of tsunamis. But no standardized warning system exists for landslides, which are much more localized disasters and often occur in rural areas.

“They kill thousands of people each year. They affect millions (of people) and cause billions of dollars of damage.”

Landslides hit such small areas, in such varied environments, that warning models are difficult to construct. But to start, NASA is building a model to map where (and in what conditions) landslides pose the most risk, estimating the hazard level based on rainfall and updating every three hours.

The key is gathering data: the more data gathered, the more accurate and powerful the models become.

But how to gather enough information to verify and update the model, with such small and localized events, limited satellites, and a world to search?

NASA’s answer is… you. Finding out when and where landslides occur is a huge challenge, one that NASA is hoping to offset with many eyes. While the satellites are useful, as far as they go, they must also be joined with reports from media and witnesses on the ground.

Using the Landslide Reporter tool, you can add data like time, location, cause, size — on a scale from “small to “catastrophic” — and the types of landslides observed. (You can even name it!) All the fields are explained in how-to guides, so you know what info goes where, says COOLR’s architect, Caroline Juang.

“The variables themselves are not at a level where they are so highly scientific that nobody can learn it,” Juang says.

Since its launch in spring 2018, roughly 200 landslide reports have been filed to COOLR.

“We’re already starting to see, with that small data set, that there are gaps that are starting to be filled in,” Kirschbaum says. COOLR’s “super-users” are instrumental in filling these gaps, especially in places where language barriers make scanning media reports for landslides more difficult.

Validating the crowdsourced data is also difficult, but it’s crucial: NASA cannot be 100% sure all of the reports are accurate. Currently, reports are vetted by analyzing the information: is there a requisite link provided? Can corroborating media reports be found? Is there too little data, or is it too suspect, to credit the report?

“By and large, we’ve been very pleased so far at the people that are contributing,” Kirschbaum says. “They’ve provided a lot of information, and it’s pretty high quality.”

To put their knowledge into action, NASA has partnered with Rio de Janeiro to co-develop a local version of the landslide model. Rio is a vertical city where landslides have had a deadly impact: in 1966 and 1967, landslides and floods killed hundreds of people in the city.

Because Brazil is so susceptible to sudden cloudbursts, and because Rio is partially built upon so many slopes, the city monitors landslide hazards on hills, maps areas of high risk, and has alert systems — including alarms — run out of the city’s operations center.

“You don’t need a huge landslide to have a huge impact,” says Felipe Mandarino, a geographer and information coordinator at Rio’s city hall.

Landslides pose the greatest risk to structures on unstable slopes, whether it’s the bluffs of Southern California or the hills of Brazil. When the ground gives way, it impacts both poles of the economic spectrum: the fabulously wealthy, who perch like peregrines on steep hillsides for the view, and the poor, who build ad hoc housing on steeply pitched land for the necessity.

Still, in Rio, formal construction uses information on stability and drainage requirements, and it will usually have quality foundations that are less susceptible to landslides. In the informally built favelas that crowd the hillsides, homes are at greater risk. A leaky water pipe, for example, could eventually cause part of the slope to give way from only a little bit of rain.

“The risk is as unequal as the income,” Mandarino says.

As climate change causes the severity and frequency of heavy storms to increase, the risks of landslides will rise accordingly. Through COOLR, citizen scientists have the chance to make a real impact, putting us all on a little better footing during the uncertain times ahead.

Ed. note: This article has been updated to reflect that Felipe Mandarino is a geographer. An earlier version incorrectly stated that he was a geologist.

Planet Earth
Are we living in a baby universe that looks like a black hole to outside observers?
If the black holes that form in our cosmos give birth to baby Universes, perhaps we arose from the formation of a black hole ourselves.
Up Next 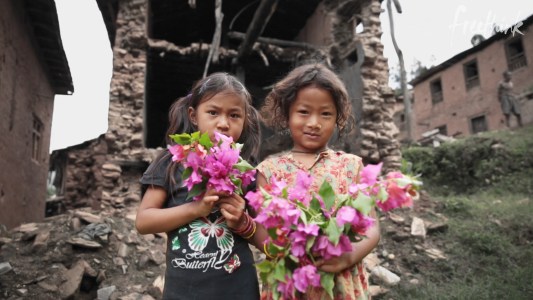 Thousands die in earthquakes every year – even though we know how to build safely. This engineer is working with people in the most vulnerable places to figure out why.

Disaster Response
Could we end earthquake deaths?4:56
Subscribe to Freethink for more great stories
Subscription Center
Sections
Video
Freethink
Subscribe
We focus on solutions: the smartest people, the biggest ideas, and the most ground breaking technology shaping our future.
Subscribe