Cities are hot. With the dense populations, tall buildings, cars, concrete sidewalks, and miles of black asphalt, it’s no wonder the city feels like a sauna compared to the cool countryside. The effect is known as the “urban heat island.”

There is a simple solution: shade — but not just any shade. A new study measures precisely which shade is the best at cooling cities — and where we need it.

SimCity, Ohio: A team of scientists from The Ohio State University (OSU) combined temperature data from NASA with LiDAR (using lasers to detect the shape of objects) from airplanes and a regular ol’ two-dimensional map to create an extremely detailed digital model of a section of Columbus, Ohio.

“We can use the information from our model to formulate guidelines for community greening and tree planting efforts, and even where to locate buildings to maximize shading.”

They calculated shadows cast by buildings and trees over one hour on September 14, 2015, from 11 a.m. to noon. The model contained 25,000 buildings, and it provided insight into the relationship between shade and temperature.

“We can use the information from our model to formulate guidelines for community greening and tree planting efforts, and even where to locate buildings to maximize shading on other buildings and roadways,” Jean-Michel Guldmann, co-author of the study and professor emeritus of city and regional planning at OSU, said in a statement. “This could have significant effects on temperatures at the street and neighborhood level.”

What they found: To no one’s surprise, the team found that trees cool urban environments. This was particularly true of large, mature trees.

They also found that, although buildings increase the temperature in the area, the shade they cast also has a cooling impact, especially when they cast it on another rooftop or parking lot.

“We’ve long known that the shade of trees and buildings can provide cooling,” said Guldmann. “But now we can more precisely measure exactly what that effect will be in specific instances, which can help us make better design choices and greening strategies to mitigate the urban heat island effect.”

The team also found that the best way to cool a city is with green spaces — like grassy areas and shaded bodies of water. They published their work in the journal Computers, Environment, and Urban Systems.

Why this matters: This information could help urban planners create a sustainable way to keep cities cool, without excessive air conditioning — and with a warming climate and growing city populations, that could become critical.

These models could also help identify areas that are deprived of shade and likely to suffer more from heat waves.

The same team published a study last year that showed that access to local green spaces, like parks, trails, or a wooded neighborhood, is not equally distributed across neighborhoods. Using satellite imagery and census data in cities like Columbus and Atlanta, they showed differences in green spaces were linked with neighborhoods’ racial and socioeconomic demographics.

“Having close and convenient access to green spaces and vegetation within one’s neighborhood can bring many ecological and health benefits,” said Yujin Park, lead author of the study, at the time. “These green resources should be available to anyone, and to any community.”

The score combines data like tree coverage, race, wealth, and density. More often than not, the city maps shows wide disparities in access to trees, typically associated with wealth and race.

The tree equity map raises awareness about the issue, but it’s also a way to offer recommendations for where communities should plant trees, reports Fast Company.

By revealing and closing “tree gaps,” studies like those from OSU and American Forests can show how planting new trees in specific areas can help achieve more shade equity while also improving air quality and cooling the urban heat islands. 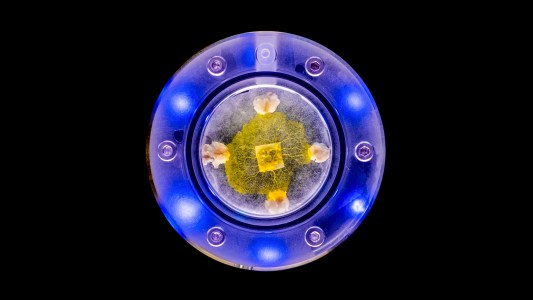 Aerospace
“The Blob,” a strangely intelligent slime mold, is going to space
By Kristin Houser
Subscribe to Freethink for more great stories
Subscription Center
Sections
Video
Freethink
Subscribe
We focus on solutions: the smartest people, the biggest ideas, and the most ground breaking technology shaping our future.
Subscribe