As a mariner, commercial diver, and outdoor athlete, Jeff Denholm has been facing down the sublime, terrifying power of nature for most of his life. Not even the loss of his right arm — in an accident on a trawler off the coast of Alaska — could stop him. He didn’t want his injury to stop him from living an active lifestyle so he created prostheses designed to keep him surfing, skiing, and mountain biking. He also became a surfboard-bound ambassador for Patagonia.

His jousting with the elements has taken on a more combative role, as well. After becoming an equipment lessor for fire departments, predominantly in the West, Denholm discovered that the fire-retardant sprays currently in use — foams and gels made to halt a fire’s advance or smother it — contain toxins potentially harmful to both the environment and the first responders.

Never one to sit back and wait for a solution to come to him, Denholm decided to tackle the problem. A random encounter led to Denholm meeting Stephen Haddix, a scientist who was already working on a more environmentally and health friendly alternative to current fire retardants. Haddix became a firefighter in college, battling flames in Corvallis, Oregon. The duo founded ATIRA Systems, a technology company with a mission to develop more ecological and safer products for firefighting. Their flagship product is called Strong Water — a non-toxic variant that Denholm says is even more effective than the current foams and gels, made from some of the same plant derivatives employed by the cosmetics industry.

Denholm discovered that the fire-retardant sprays currently in use contain toxins potentially harmful to both the environment and the first responders.

Strong Water has been approved for use in California, where fire departments in San Diego and San Bernardino counties are equipped with it, and Forest Service Region 6 in the Pacific Northwest carries the retardant on their Denholm-supplied trucks. Strong Water was deployed against Napa and Thomas in a literal baptism by fire in 2017.

Freethink talked to Denholm about the power of wildfire, nature as a spiritual experience, and trying to bring new technologies to firefighting.

Freethink: How did you learn about the issues with current fire retardants being used by firefighters?

Jeff: I started in the industry 10 years ago with one piece of equipment, as an engine contractor. I started with a Type 3 fire engine and started working in California, mostly, out on forest fires. A chief said, “Hey, if you add retardant to your vehicle, we’ll give you more work.”

So that’s when I started researching the retardants out there. The inflection moment for me … was I read an article about a group of forest service employees who actually sued their own employer for the use of (the fire-retardant) Phos-Chek because it contained EPA banned chemicals.

Freethink: What kind of toxins are being used in the current fire retardants that may be harming the environment or first responders?

Jeff: There’s a high level of phosphates in them, and when they get in the water, they kill the fish, they kill the fish eggs. There’s PFAS in the class B retardants, and the DoD is being sued for the use of these, and our product is a replacement for that.

It’s a little-known fact that retardants are some of the most harmful carcinogenic products out there, whether it be retardants that go on your furniture, your clothing, or that you drop from a plane, or being held at an airbase to fight a fuel fire. They’re just really harmful.

“Having spent a life in nature and these wild places, having done the things I have, I’ve learned how fragile they are, and I’ve seen the degradation of our planet over the last three and a half decades.“

And the rub with the existing retardants is that, from a high altitude and a high speed, they disperse on the ground. They’re having a limited effect at stopping these new super wildfires.

We’re not trying to point a finger at them (foam and gel makers) and say they’re bad guys, absolutely do not want to do that. All we’re trying to do is leverage more effective technology into the industry because it’s needed. The problems speak for themselves.

Freethink: As an outdoor athlete and a commercial diver and mariner, how do your experiences with nature inform your company and views?

Jeff: This business is sort of the nexus of a lot of experiences in my life, and it sort of chose me.

I’m an adventure-based guy. I dropped out of college in Boston because I spent a summer fishing Alaska. I got one look at those mountains, and I said, “I don’t want to be in an office, I don’t want to work a traditional lifestyle.”

Before my injury, the world was my oyster, athletically — certainly in big mountain skiing or big wave riding. But things happen. I had a dangerous job at sea, which I really enjoyed because I was in the fresh air in a wild environment and challenging environment. And the same with commercial diving.

For me, engagement with nature at its peak power — like riding a big wave or being on a big mountain — it’s the whole experience. The surroundings, the immensity of it all, the power of it all. I used to tell my mom it’s like church to me.

“The fires are bad, and they’re wiping out natural resources and producing more CO2 than cars do.“

Obviously, having spent a life in nature and these wild places, having done the things I have, I’ve learned how fragile they are, and I’ve seen the degradation of our planet over the last three and a half decades of my travels.

Freethink: Can you tell me about the drawbacks to the current fire retardants that don’t necessarily involve toxicity per se?

Jeff: They are currently dropping phos-chek from C-130 fixed wing aircraft. The current tactic of deploying (toxic long-term retardant) from fixed wing aircraft, at high speed from high elevation, dropping retardant on the ground, in advance of a wildfire, in an attempt to control it – is failing.

ATIRA is partnering with Erickson Aviation to deliver a 21st century “special forces” approach to wildland firefighting. And what we’re enabling is to allow the helicopters to go low, in highly targeted fashion directly to the fire head (the fastest spreading part of the fire), injecting our product to smother and knock it out immediately.

These things are growing faster than they ever have. Embers can travel as far as 30 miles, can be up to 200 feet long, and move at 70 mph — they’re just a different animal. One of the big issues, it used to be what fires burned. When you consider the amount of CO2 being produced by fires burning hotter and longer and are consuming larger swaths of forest that themselves have been under-managed … the fires are bad, and they’re wiping out natural resources and producing more CO2 than cars do. There are these ancillary issues to wildfires now.

“I said ‘look, man, we’re living among the most technologically advanced communities in the world here in California. Why is it that we are not optimizing technology to solve one of the biggest problems that our state has?’”

(Strong Water) can effectively prevent flashover , which is a significant threat to firefighters. We significantly reduce structural loading on a compromised structure, because you’re using that much less water.”

Freethink: Especially with the issues that climate change is amplifying — fires are larger, water is more precious — is this, in your mind, the future of firefighting?

Jeff: Yeah, that’s absolutely why we exist. I met with Gavin Newsom before he was elected … I said “look, man, we’re living among the most technologically advanced communities in the world here in California. Why is it that we are not optimizing technology to solve one of the biggest problems that our state has?”

And oh, by the way, the problem is affecting the whole planet. Our primary reason for our existence is to help advance the industry, help firefighters do a better job — prevent further damage being caused by potential harmful chemicals, prevent these large swaths of natural resources from being burned up.

I’m not pointing fingers at Phos-Chek, and I’m not pointing at the firefighters. They’re heroes. My family’s full of first responders; I was a paramedic as a merchant marine. It’s in my blood. And we’re just trying to help them.

We’re just trying to do better, that’s all. 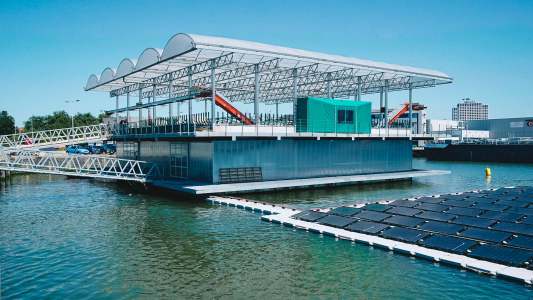 Inspired by the food shortages witnessed in New York City following Hurricane Sandy, this husband and wife team came up with the idea for a sustainable farm that floats on the sea.

Sustainability
Floating farm takes sustainable agriculture to the next level
3:15
Subscribe to Freethink for more great stories
Subscription Center
Sections
Video
Freethink
Subscribe
We focus on solutions: the smartest people, the biggest ideas, and the most ground breaking technology shaping our future.
Subscribe