Collins once spilled the mop water all over the floor at the grocery store where he used to work. During the process of filling the bucket and adding soap, he had missed a few steps. No big deal, right? Just clean it up and move on. But when Collins [who preferred to use only his last name] made the same mistake a second time, his employer wasn’t happy.

Things got worse for Collins when all the employees at the store were put on a swing schedule, filling different shifts each week. Over time, little things added up, and eventually, Collins left the job.

“I wish they could have been more accommodating, and gave me just one set schedule,” says Collins.

Having a job is vital to Collins. He wants to support himself and pay his rent instead of relying on his parents. And for Collins — who says he has ADHD and other learning differences — a job is therapeutic.

“You’re not in your head all the time. Because if you have something to do, you’re less likely to have your thoughts wander into a rabbit hole,” he says.

“You’re not in your head all the time. Because if you have something to do, you’re less likely to have your thoughts wander into a rabbit hole.”

The store’s owner, T Land, opened the tiny shop as a way to simultaneously support two causes they’re hugely passionate about: environmentalism and social justice. The way Part & Parcel does this? By doing away with product packaging and hiring a neurodiverse staff.

“Our world is really complicated,” Land says. “So many different things intersect. I don’t think that we are going to be able to tackle all of the things if the way we address them is so singular.”

The inside of Part & Parcel resembles a typical bulk food section, commonly found at Whole Foods or The Fresh Market. It has large bins filled with beans, spices, pasta, nuts, and grains. One shelf is dedicated to herbs. Another houses nuts and a grinder to make nut butter. But you won’t find any plastic wrap, cardboard boxes, or aluminum cans.

As one of the few package free stores in the U.S., Land is asking people to change their habits. For now, customers place orders online and pick them up in reusable containers at the window. But Land’s vision for the future is that customers bring in containers to fill with goods or borrow an upcycled glass jar provided by the store.

The Durham County landfill closed two decades ago, so now, Durham spends millions each year trucking their trash elsewhere in the state. Each day, as many as 40 truckloads end up in Sampson County, 100 miles away, where predominantly Black neighborhoods surround the landfill. Nearby residents have expressed concerns about air and water quality. Land says these issues amount to environmental racism, and therefore align with their mission to create a better world for marginalized people.

“Inclusion and diversity matters for all people. It just matters. I’m trans. I have a hidden physical disability. I’m neurodivergent. So this is close to me,” says Land.

Part & Parcel isn’t stopping there. Another group of marginalized people they want to support: neurodivergent people, which simply means people who think differently. This includes people with ADHD, autism, or dyslexia.

People with disabilities (defined by the ADA as conditions that limit a person’s ability to carry out important life tasks) are employed at a significantly lower rate than average. Last year, only 17.9% of disabled people were employed, according to government data, versus 61.8% of people without a disability. Young adults with autism have the lowest employment rate compared to their peers with other sorts of disabilities.

But not everyone with these conditions self-identifies as “disabled.” So, there is a growing movement to rethink these labels.

“[Neurodiversity] is essentially the name of a movement for the recognition that people with labeled disabilities have strengths, as well as weaknesses, and that they can be advantages,” says sociologist Judy Singer, who coined the term “neurodiversity” in 1998.

“Unemployed people are vilified,” says Singer, noting that neurodivergent individuals suffer disproportionately from being out of work. “And that has just got to stop.”

Land launched Part & Parcel as a spin-off organization to Durham’s Autism Support and Advocacy Center, which they opened in 2008. The Center offered programs for autistic people from preschool to adulthood. Individuals could get help cooking, looking for an apartment, or finding a job.

“A blank resume was insurmountable, most of the time. And I just thought, well, we need something where we can build a resume. A place to start,” says Land.

So Land decided to start Part & Parcel to provide job opportunities for a neurodiverse group of individuals , while simultaneously changing the public’s perception of the “ideal grocer.”

“You don’t change perspectives and you don’t change the way people think about other people by just telling them something. It needs to be a part of your life. It needs to be regular, and grocery stores are that for people. You can’t go in here without seeing someone and talking to them. And that’s a change-making space,” they say.

Accommodation is not a bad word

What Land advocates for is the acceptance of neurodiversity — the idea that our brain differences should be respected as natural rather than something that needs to be fixed.

Some developmental issues, such as ADHD, autism, Tourette’s syndrome, or dyslexia, are difficult for society to embrace. Land, on the other hand, aims to demonstrate that there is room for a wide diversity of human neurotypes to coexist.

“We’re so accustomed in America to be highly verbal, to be fast paced, to expect that ‘I showed it once, and now you’ve got it.’ These are expectations that we have that need to be broken,” says Land.

Instead of expecting employees to conform to neurotypical norms, Land allows employees to be their true selves. If that means they need white noise to stay focused, Land lets them wear headphones while they work. If they thrive with routine, Land offers them a set schedule each week.

“You don’t change perspectives and you don’t change the way people think about other people by just telling them something. It needs to be a part of your life.”

Carol Schall,  Co-Director of the Virginia Commonwealth University Autism Center for Excellence, who does not work with Land, has helped many people with autism find employment. She says it isn’t uncommon for autistic people to have a unique profile of strengths. One of her mentees now works at a hospital pharmacy: Schall says that his hyper-detailed ability to recognize patterns made him ideal for the job.

According to Singer, the concept of neurodiversity is “all about adjustments.”

“That is the idea — to look at neurodiversity in terms of strengths and weaknesses, not just the medical [model], which was like ‘What’s wrong with them? Let’s make them normal,'” Singer says.

Schall says that a job coach can help employees learn the ropes of a new position and help managers set up accommodations, as Land has done.

Simple things like posting a step-by-step pictorial guide on using the wash station, or offering frequent breaks, and allowing comfortable clothing are working well for employees at Part & Parcel.

“‘‘Accommodation’ is not a bad word. Every person in a job needs accommodating at some point, for some reason. And you do that, because ultimately, you create a more creative, innovative, productive place when everyone’s voices are heard, and when everyone’s feeling valued,” says Land.

Schall agrees that these accommodations are often simple and make the entire business run more smoothly.

“There are some specialized places that seek to hire neurodiverse individuals, however, I think the whole world would benefit […],” says Schall. “The whole environment works better.”

“Allowing neurodiversity to flourish is important for a healthy society,” she says.

More than just a grocery store

Collins is only in his second week on the job, but already he is busy — moving quietly through the store, scooping this, or measuring that. He says it is too soon to tell if Part & Parcel is the right fit for him because there haven’t yet been customers in the store. But he is optimistic.

“I don’t feel like T [Land] would get annoyed that I made a mess that I need help cleaning up. Sometimes [employers] just expect you to get it right and not make mistakes — especially if I’ve done it before and made the same mistake over again. If I went to [Land], they would say, ‘Okay, what ways can I help you remember to do this right?'” says Collins.

His advice to anyone with a disability struggling to find a job: contact your local department of vocational rehabilitation. Like Schall, this department helps school-age people with an individualized education plan and helps adults find employment, a job coach, and housing.

“They don’t know what’s behind the store. That’s validating in and of itself.”

The air conditioning cranks inside the warehouse, drowning out the sounds of clinking jars, sifting pasta noodles, and a stainless steel grinder that crushes nuts into butter.

Collins has two hours to pack the first grocery order for the day. It is more than enough time. But despite the on-demand atmosphere we currently live in, where items arrive at your doorstep hours after they are ordered, Land doesn’t want to rush things. Instead of fulfilling orders as they come in, Land says that a regular schedule helps the team keep up with the work. And the team is on time: having grocery orders ready for pick-up so that customers can grab their order without a second thought.

“[Customers] really only know this as a store. They don’t know what’s behind the store. That’s validating in and of itself. We have created this thing that’s legitimized in the community. And it is running on the work, and ideas and creativity of autistic and other neurodivergent people,” says Land. 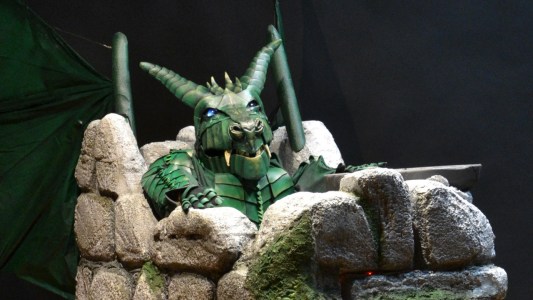 Many Halloween costumes are not designed for kids who wear them sitting down — the maker community wants to change that.

Accessibility
DIYers create halloween costume for 10-year-old in a wheelchair
By Ann-Louise Davidson
Subscribe to Freethink for more great stories
Subscription Center
Sections
Video
Freethink
Subscribe
We focus on solutions: the smartest people, the biggest ideas, and the most ground breaking technology shaping our future.
Subscribe