The ability to manipulate genes once seemed like something out of science fiction. But now the first genetically modified animal is headed to U.S. supermarkets.

The development of this new GMO salmon began in 1989 when Atlantic salmon eggs were injected with genes from both Chinook salmon and ocean pout, an eel-like fish. This modification speeds up the growth cycle from three years to 18 months. The salmon are currently being raised at two facilities in Canada and Indiana. It is the first genetically engineered animal to be approved for sale, and the first U.S. harvest is expected in the fall of 2020.

The GMO salmon’s producers, AquaBounty Technologies, say bringing production closer to consumption reduces the carbon footprint of getting fish to market and solves problems plaguing the aquaculture industry, like ocean pollution and overfishing. With an increasing global population, some say biotech could be the key to sustainably increasing the amount of food the planet will need this century.

Opponents of GMO food have derisively called the salmon “Frankenfish,” and AquaBounty CEO Sylvia Wulf has embraced the name, saying it faces the same kind of pitchfork-wielding mob that Frankenstein’s monster suffered.

“Land-based aquaculture and biotechnology are going to be a part of the future,” Wulf said. “We blazed the trail and set up the process so others will be able to follow it.”

From Lab to the Market

The road to bringing GMO salmon to the U.S. wasn’t a smooth one, but it’s not the first food innovation to be the center of a long political battle. Take the case of margarine versus butter, for example. When margarine, with its recipe of sheep’s stomach, beef fat, and potassium salts, was first introduced, it was demonized by the dairy industry, outrageously taxed, and banned from being yellow. The current war on lab-grown protein launched by the cattle industry includes courtroom battles threatening to outlaw using the word “meat.”

AquaBounty has encountered similar battles since it first approached the FDA in 1995, when there were no rules in place to guide GMO animal products. The FDA decided it would regulate GMO foods the way new drugs are regulated — requiring testing for safety, toxicity, allergens, nutritional profile, protein content, fat content, minerals, hormone concentrations, and other lab work.

For AquaBounty, it was an arduous process that took more than a decade of lab work, followed by a string of assessments by other U.S. agencies. But it had its share of excitement, too, like when Greenpeace showed up on the roof of their Canadian facility with a helicopter and motorcade, wrapped the building in caution tape, and climbed on the roof to protest the operation — giving the overnight building manager the fright of his life.

In total, the process cost the company around $120 million and over three decades of work.

“It is the most analyzed fish product in the world,” said Garth Fletcher, the Canadian researcher who invented the salmon. “Once we submitted the data and (the FDA) reviewed it, it took a while for them to codify the way in which they are going to evaluate the technology.”

Paving the Way for Food Innovation

Genetically modified foods are expanding, with new products in development around the world such as dairy cows that don’t grow horns (and therefore don’t need to be painfully dehorned), pigs that are low-fat and excrete less polluting nitrogen, and chicken eggs that fight cancer. But the food tech space can expect a series of battles. The history of other food innovations and the current turf war over alternative meats show that regulatory bottlenecks can stifle food innovation, and public perception is hugely important.

Today, popular food fashions claim that “pure” and “natural” foods — with no additives or GMOs — are healthiest, even though the bulk of scientific data shows GMOs are safe for the consumer. As with most innovations, the old guard is focused on protecting its turf, and consumers are often caught in the middle.

As is the case with AI, autonomous vehicles, and other advanced technologies, the innovators who work in laboratories will have to participate in ethics conversations, develop the right language to use for the products they create, and play an active role in the development of effective regulations.

Innovation is also needed to develop better methods of testing foods quickly and thoroughly (so it doesn’t take 30 years to evaluate a single product), as well as producing data that helps consumers make sense of issues like the health, safety, and environmental impacts of high-tech foods.

Join Michael O’shea as he visits Aquabounty to get up close and personal with GMO Salmon. 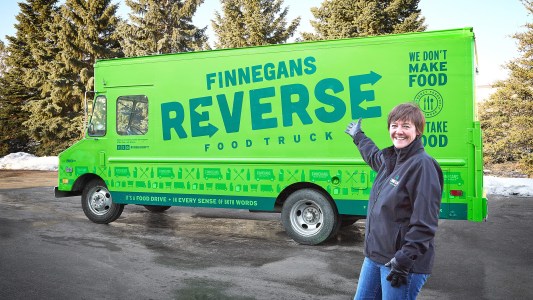 Jacquie Berglund is using the profits from her beer company to buy organic produce from local farmers and distribute the produce to food banks in the area.

Female Leaders
This woman is on a mission to turn beer into food
By Teresa Carey
Subscribe to Freethink for more great stories
Subscription Center
Sections
Video
Freethink
Subscribe
We focus on solutions: the smartest people, the biggest ideas, and the most ground breaking technology shaping our future.
Subscribe