When Nzambi Matee was 26 years old, she decided to quit her job as a data analyst in Kenya’s oil industry and devote her life to solving one of the world’s biggest problems: plastic waste.

Three years later, she is now the owner of Gjenge Makers, a factory that transforms plastic waste into pavers, a type of construction brick commonly used to create walkways or patios.

The world produces 380 million tons of plastic every year, and less than 10% of it gets recycled.

Today, much of that plastic waste is piling up in our oceans and landfills, where it harms wildlife, the environment, and even human health.

Matee lives in Nairobi, which generates 550 tons of plastic waste every day, and seeing discarded plastic bags on the city’s streets is what inspired her to launch her business.

She started by setting up a small lab in her mother’s backyard where she would prototype bricks made from a mix of plastic waste and sand.

“I shut down my social life for a year and put all my savings into this,” Matee told the United Nations Environment Programme (UNEP), which named her one of its 2020 Young Champions of the Earth in December. “My friends were worried.”

When she won a scholarship to attend a social entrepreneurship training program at the University of Colorado Boulder, she took those early prototypes with her, further refining them in the university’s labs.

Matee also used her time at the school to design the machines needed to mass produce the plastic bricks.

Gjenge Makers now produces 1,500 bricks every day — some of the plastic waste it uses is purchased from recyclers, but much of it is donated by packaging factories.

“Companies have to pay to dispose of the waste, so we solve their problem,” Matee said. “The waste essentially comes for free.”

Once the plastic waste arrives at the factory, it’s processed and crushed before being mixed with sand and heated, a Gjenge Makers spokesperson told Freethink. After that, the mix is pressed into the brick-shaped molds and cooled.

Gjenge Makers currently offers multiple colors of its plastic bricks in three different thicknesses — the thicker the brick, the stronger it is, but even the thinnest option is able to hold twice the weight of concrete bricks.

“Plastic is polymerase in nature. It’s thread-like,” Matee told Reuters. “It doesn’t have a lot of pocket holes, therefore making it less brittle compared to concrete. That’s why it doesn’t break very easily.”

The plastic bricks are also cheaper than ones made of concrete and about half their weight, making them easier to transport.

Since its founding, Gjenge Makers has created 112 jobs — most of which are filled by women or members of youth groups — and recycled more than 22 tons of plastic waste into bricks.

I jumped off a cliff without a parachute. But isn’t that how great things are done?

Those bricks can be found at homes, car parks, and schools throughout Nairobi, and Matee is now working to add another production line to her factory — once in place, her startup should be able to produce three times as many pavers every day.

“I really jumped off a cliff without even a parachute — I was building it as I was falling down,” she told UNEP of her experience with Gjenge Makers. “But isn’t that how great things are done?”

Food
The future of meat is sustainable — and a little weird
Ideas to reduce the meat industry’s impact on the environment include 3D-printed steaks, cultivated tiger meat, and potty-trained cows.

Sustainability
Google’s free tool will breathe new life into your old laptop
Google’s free ChromeOS Flex is now widely available, giving anyone the ability to turn their old laptop into a makeshift Chromebook.
Up Next 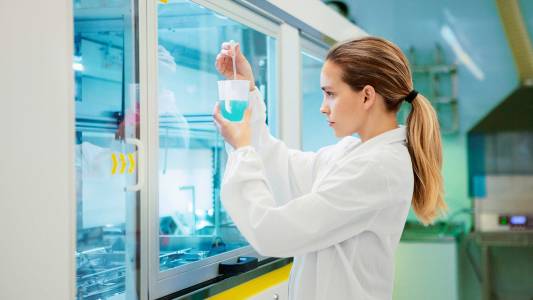 The newly announced Sci-Founder Fellowship program is offering $400,000 in science startup funding to up to eight teams of early-career scientists.