A team of engineers has developed a way to make sustainable concrete by adding living organisms to the mix.

The method is not only carbon neutral, but could even prove carbon negative because the material is able to sequester carbon and store it within the concrete.

The challenge: The building and construction sector is responsible for a big chunk of global carbon emissions. A lot of those emissions come from the production of cement, which is the second most consumed material on the planet behind water.

Cement produces emissions in two main ways. One is through the chemical reactions that occur while sintering limestone and other materials to make “clinker,” a key component of cement. The other comes from using fossil fuels to heat up kilns to very high temperatures.

Cement production releases massive amounts of carbon dioxide, other greenhouse gasses, and particulate emissions into the atmosphere. But it results in the world’s most widely used building material: concrete. Cheap, familiar, and reliable, concrete will likely remain the construction industry’s preferred material for years to come.

That’s why many researchers have been experimenting with ways to make concrete more sustainable, such as by using alternative materials or trying to capture carbon dioxide during the production process.

Microalgae may be the key ingredient.

The solution: When you look at the oceans from space or a plane, you’re likely to see vast swaths of bright turquoise water. These are blooms of algae, called coccolithophores.

Coccolithophores are single-celled microalgae. These tiny organisms are covered in microscopic plates made of calcium carbonate, the mineral that forms the shells and skeletons of many sea creatures.

When shedding these plates, coccolithophores not only make the ocean surface appear turquoise, but they also send massive amounts of carbon to the deep ocean. (After all, carbon is one of the main elements of calcium carbonate.)

Calcium carbonate is also a key component of limestone. The researchers behind the new cement-production method, led by a team at the University of Colorado Boulder, used coccolithophores to grow calcium carbonate and turn it into a limestone alternative, with which it’s possible to make concrete.

Like normal limestone, this alternative still needs to be heated and therefore releases carbon into the atmosphere. But it takes a far lower toll on the environment considering it doesn’t need to be quarried, and the process of growing it sequesters at least as much carbon from the atmosphere as is produced while making concrete.

Another benefit: these creatures produce calcium carbonate quickly, which means the supply could be ramped up.

It’s currently unclear how cost-effective the method would be compared to traditional cement production.

But the UC team is aiming to make the process more efficient by optimizing strain selection and the growing process — improvements that should be made easier thanks to a $3.2 million grant that the team recently scored from the U.S. Department of Energy. 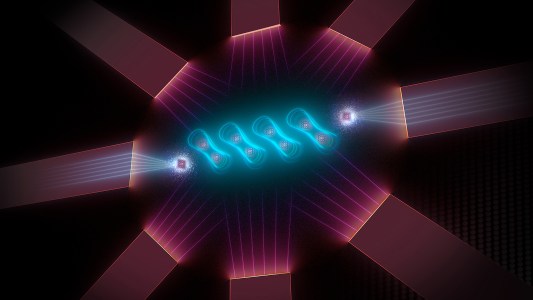 A first-of-its-kind quantum simulator could lead to the creation of never-before-seen materials powered by quantum phenomena.

Physics
Australian scientists put the quantum world on a microchip
Subscribe to Freethink for more great stories
Subscription Center
Challenges
Video
Freethink
Subscribe
We focus on solutions: the smartest people, the biggest ideas, and the most ground breaking technology shaping our future.
Subscribe