DNA is everywhere. Scientists have been using environmental DNA (eDNA) for more than 10 years to measure biodiversity and discover new species, often filtering it from water or soil.

Two separate research groups have recently proven that the atmosphere contains measurable quantities of DNA, too. And, by vacuuming it out of the sky, researchers can identify numerous animals that lived or passed through that region.

eDNA is everywhere: Researchers have been analyzing eDNA for large-scale biodiversity monitoring in ancient and modern ecosystems.

“The ability to detect so many species in air samples using DNA is a huge leap.”

But eDNA gives a non-invasive, consistent picture of an ecosystem’s population.

Earlier this year, Freethink’s B. David Zarley wrote about how environmental DNA was used to verify a new whale species. Photos and audio recordings of the whale led a team of researchers to believe they had spotted something new. But often, visible features and behaviors aren’t enough to classify a new species.

So, they collected seawater samples that contained eDNA — a snapshot of the biodiversity in the region. Animals in the area shed DNA into the water, and an analysis of that DNA could be enough to prove that the whale they saw was indeed a new species.

eDNA from the air: The two research groups, from London and Denmark, that were the first to demonstrate measurable amounts of DNA in the air, suggest that collecting airborne samples could be a faster, more cost-effective way to survey animal populations.

Their preprints, posted on bioRxiv, have caught the attention and praise from many scientists, reports Science.

“The ability to detect so many species in air samples using DNA is a huge leap,” ecologist Matthew Barnes, from Texas Tech University, said. “It represents an exciting potential addition to the toolbox.”

The studies suggest that many other things are floating in the air, in addition to plant spores, like animal hair and cells.

To find out exactly what was in the air, a team from York University and the Queen Mary University of London, led by Elizabeth Clare, set up vacuum pumps in 20 locations in Hammerton Zoo Park.

A zoo was the optimal place for the study because they could use samples from the zoo to determine whether eDNA found in the air came from the caged animals — because many of the captive species do also exist outside the zoo in that region.

A profile of local animals: The team collected 72 air samples, scraped them from the filters, and sequenced the DNA. They found 25 species of animals in the air and shared their results, which have yet to be peer-reviewed, in bioRxiv.

17 of the animals they identified were from the zoo, and species like deer and hedgehog, which live in areas surrounding the zoo. They also found chicken, pig, and cow — likely from the meat that zookeepers fed to the captive animals.

On  the opposite side of the North Sea, a Danish team had the same idea. Led by ecologist Kristine Bohmann from the University of Copenhagen, the group sucked up air from three zoo locations and found 49 species.

Even though the technique has gotten some attention from researchers eager to give it a try, there are still questions to work out — like how to design a controlled study, how far eDNA travels, and how it got there.

But once refined, this technique could be used to monitor animal populations that are hard to observe, measure biodiversity in different places over time, and even discover new species floating on the wind.

CRISPR
New CRISPR-based map ties every human gene to its function
Researchers used a single-cell sequencing tool Perturb-seq on every expressed gene in the human genome, linking each to its job in the cell.

Aging
The age reversal tech that billionaires are banking on
How long can a human being not only live but thrive? A race to find out involves some of the biggest names (and bank accounts) in tech.
Up Next 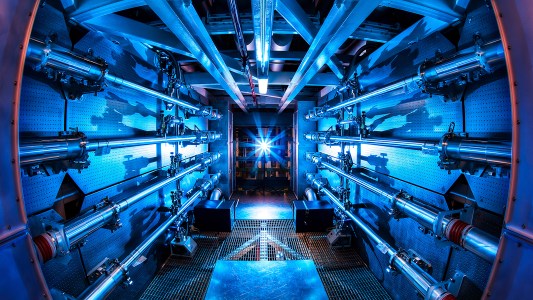 Scientists appear on the brink of achieving nuclear fusion ignition, bringing the dream of near-limitless clean energy closer to fruition.