From Italy to Japan, record-breaking temperatures have been recorded across the Northern Hemisphere in the past month.

The mercury in Japan and Italy passed 40C in June, delivering the worst heatwave since records began in 1875, with residents asked to conserve energy. Meanwhile, downtown Rome saw its hottest day ever.

Climate change is the likely cause, according to new research by a team of climate scientists collaborating for World Weather Attribution (WWA).

“Pretty much all heatwaves across the world have been made more intense and more likely by climate change,” study co-author Ben Clarke, an environmental scientist at the University of Oxford, told Reuters.

The team found climate change was making heatwaves more frequent and hotter, peaking at temperatures of 1C higher. It also made the deadly heatwave in India and Pakistan in April 30 times more likely, according to WWA.

So what can the world do to cope with these heatwaves? Here are some of the solutions we’ve covered on the World Economic Forum, as well as what we’re doing to help.

Urban greening – creating living walls, roofs and green corridors – can benefit cities in areas of high rainfall, including around the equator and in northern Europe, because the water vapour released by plants during photosynthesis has a cooling effect, according to this Conversation piece. Freetown in Sierra Leone aims to plant 1 million trees to cool the city, through its “Freetown the Tree Town” scheme.

The World Economic Forum’s Global Commission on BiodiverCities and Adrienne Arsht-Rockefeller Foundation Resilience Center (Arsht-Rock) have developed the Heat Action Platform (HAP), an online resource that provides cities around the world with a roadmap and tools to address extreme heat.

In the Persian Gulf, a study has found traditional architecture, including narrow alleyways that maximise shadows, internal courtyards and moisture-absorbing, reflective building materials like limestone can help to cool urban areas. Cape Town and Buenos Aires are putting in place light-coloured and other cooling roofs on public housing.

Greek capital Athens has appointed a Chief Heat Officer, now also the first ever Global Heat Officer, who is piloting categorizing heatwaves by threat level – similar to hurricane warnings. An algorithm uses weather predictions and past mortality rates to give residents an indication of how dangerous the heat could be.

In Seville, the mayor and Arsht-Rock are working on a three-level scale of categorization and will name heatwaves in reverse alphabetical order. The first five will be called Zoe, Yago, Xenia, Wenceslao and Vega.

The new system was brought into use at the end of July 2022, with Zoe becoming the world’s first named heatwave.

A US study found strategies like shading and natural ventilation could reduce pressure on air conditioning by up to 80%. Simulations using weather data from 2021 found these techniques kept temperatures in apartments out of the ‘danger zone’, even without using aircon. It’s thought the findings could be used to establish building codes around operable windows and working shades, to protect renters.

Around the globe, cities are experimenting with cooling techniques, including Vienna’s network car-free ‘cool straßen’ (cool streets) in Austria, where mist sprays dispense fine clouds of temperature-lowering vapour. An app, Extrema, warns of extreme heat episodes around Europe and offers a helpful list of places you can go to cool off. In Tokyo, wind tunnels are being built to increase airflow in hot areas, while Tel Aviv is installing light-coloured fabric sun shades with solar panels that power lights at night. 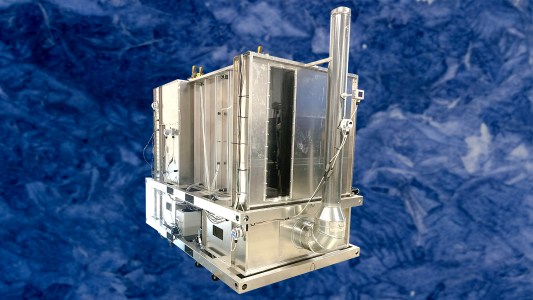 Blue Frontier is developing a new kind of air conditioner that requires 50-90% less electricity than the units we use today.