“This bioprocess provides a sustainable alternative to today’s production routes to these essential chemicals, which currently rely on fresh fossil feedstocks and result in significant toxic waste,” Jennifer Holmgren, CEO of LanzaTech, said in a statement.

Engineering bacteria: The team of researchers from LanzaTech began their search with the bacteria Clostridium autoethanogenum, which naturally produces ethanol.

“This bioprocess provides a sustainable alternative to today’s production routes to these essential chemicals, which currently rely on fresh fossil feedstocks and result in significant toxic waste.”

They looked through strains of the bacteria for enzymes that allow the microorganism to produce acetone or isopropanol (known as IPA) instead of ethanol. By selecting these acetone- or IPA-producing genes, they combined them into a single organism that ferments carbon dioxide from the air to make the chemicals.

“You can imagine the process similar to brewing beer,” Michael Köpke from LanzaTech in Illinois told New Scientist. “But instead of using a yeast strain that eats sugar to make alcohol, we have a microbe that can eat carbon dioxide.”

The team demonstrated how the process could work at a large scale by circulating carbon dioxide through the bacteria in a 120-liter bioreactor. The modified bacteria absorbed the carbon dioxide and turned it into the valuable industrial chemicals.

Why this matters: When we consider becoming carbon-neutral, our minds likely think of solar, wind, or geothermal power — ways to make electricity without fossil fuels. However, there are other things we rely on that are much harder to decarbonize than electricity — like manufacturing chemicals, such as acetone, which is used in cleaning products and plastic manufacturing, and IPA, which is used in hand sanitizer.

In addition to reducing carbon dioxide emissions, this new gas fermentation technique also eliminates the usage of fossil fuels, which are traditionally used to produce acetone and IPA.

Producing one kilogram of acetone normally emits 2.55 kilograms of carbon dioxide into the environment, according to the paper published in Nature Biotechnology, and with IPA, it’s 1.85 kilograms.

The researchers did a life-cycle study and discovered that their new fermentation-like process might cut greenhouse gas emissions by 160% if broadly implemented – in other words, it took in more CO2 than it released.

“Today, most of our commodity chemicals are derived exclusively from new fossil resources such as oil, natural gas or coal,” Holmgren said in a statement.

“The acetone and IPA pathways developed will accelerate the development of other new products by closing the carbon cycle for their use in multiple industries.” 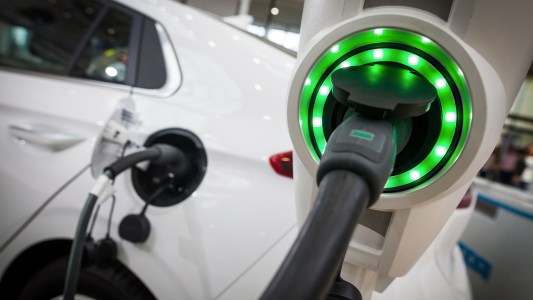 Starbucks is aiming to capitalize on the demand for electric vehicle infrastructure by installing chargers at up to 15 locations in the U.S.

Cars
Starbucks is creating an EV “charger highway,” from Seattle to Denver
Subscribe to Freethink for more great stories
Subscription Center
Challenges
Video
Freethink
Subscribe
We focus on solutions: the smartest people, the biggest ideas, and the most ground breaking technology shaping our future.
Subscribe