East Africa suffered from two plagues in 2020, as COVID-19 was joined by another voracious attack: swarms of desert locusts. Their numbers possibly bolstered by climate change, the locusts descended in the billions, with swarms capable of devouring the equivalent of food for 13,000 people in a day.

To fight back, countries looked to new technology to stymie the swarms, Rachel Nuwer reports for the New York Times — and, it seems, it worked.

A daunting challenge: Locusts spend most of their time benign and alone. But when wet weather allows for larger populations, the locusts suddenly morph into their “gregarious” form and become flying famines.

A locust swarm on the wing is a regional threat, capable of traveling over 60 miles in a day.

“They can easily move across countries in a matter of days, which is one of the other major challenges in coordinated efforts that are required between nations and institutions to manage them,” Rick Overson from the Global Locust Initiative at Arizona State told NPR.

Making matters worse, the 2020 swarms hit nations not used to dealing with the pests in these numbers.

“People were operating in the dark, running around with their heads cut off in a panic,” Keith Cressman, a senior locust forecasting officer for the U.N. Food and Agriculture Organization (FAO), told Nuwer.

“They hadn’t faced something of this magnitude since the early 1950s.”

A new approach: Some nations — like Eritrea and Sudan — regularly deal with regional locust swarms. There, dedicated locust trackers hunt the hopping hordes down, figure out what stage of their life cycle they are in, and report back via a tablet-based system for authorities to plan out countermeasures.

But nations hit in 2020 lacked both locust trackers and the technology, which was already becoming badly outdated anyway. To develop a response for the 2020 swarms, agro-tech nonprofit PlantVillage built a new platform, called eLocust3m.

A locust swarm on the wing is a regional threat, capable of traveling over 60 miles in a day.

eLocust3m is designed to be user-friendly, running on smartphones and using photos to help locals ID locusts.

“We provide local scouts with smartphones and they are sent out to look for locusts,” Melodine Jeptoo, who coordinated locust scouts in Kenya with PlantVillage, told E&T. “The scouts take a photo of the insect and fill in data about life stage and air carriage”

GPS data is automatically attached to the information. That data was coupled with EarthRanger, which analyzes geographic data, as well as a supercomputer system which predicted locust swarm movements with 90% accuracy and locust swarm predictions from NASA’s SERVIR program.

Using all this data, responders could figure out where to target the locusts for aerial pesticide sprays, killing them before they could mature and mate, eventually curbing the plague.

“If we didn’t stop them, the locusts would have reached Chad, Niger, Mali and Mauritania,” Cyril Ferrand, head of the F.A.O.’s Eastern Africa resilience team, told Nuwer.

The locust-fighting tech is designed to be user-friendly, running on smartphones and using photos to help locals ID the insects.

“We were able to prevent a much bigger catastrophe.”

Preventing the next disaster: The massive swarms of 2020 appear to be exacerbated by climate change, as wet weather sparked an increase in locust populations. The technology adapted to slowing the swarms in East Africa may prove crucial to predicting — and preventing — other climate-related disasters as well.

Researchers at NOAA and MIT are using the tools to help predict where the next swarms will emerge, and with some tweaking, the models may be able to forecast other emerging problems caused by climate change. 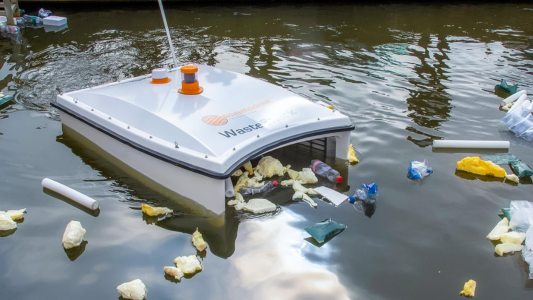