Slugs may be tiny, but they’re also mighty — each year, the slimy pests inflict billions of dollars worth of damage on the global agricultural industry.

They eat crops, and even the plants that don’t become dinner suffer in quality due to the slugs’ waste and slime trails. If that wasn’t enough reason to not want slugs around, they can also transmit diseases to humans.

Farmers can use expensive pesticides to get rid of slugs, but they’re only 10% to 60% effective, according to Oregon State University (OSU) researcher and slug specialist Rory McDonnell. The chemicals can also contaminate waterways and may affect off-target species.

There is a more natural pest-control alternative, though: a tiny parasitic worm, called P. hermaphrodita.

P. hermaphrodita is technically a nematode, also known as a roundworm, less than two millimeters long.

Don’t let its nearly microscopic size fool you, though — it’s a creepy killer (of slugs).

When it finds a slug, it slithers into the creature through a hole near the back of its head, and then feeds on its insides while quickly reproducing — in just a week, the nematode can produce thousands of new worms.

“When a slug is infested with nematodes, it liquifies,” Dee Denver, OSU researcher and nematode specialist, said. “You end up with a swarming pile of worms. It’s pretty gruesome.”

Introducing the parasite can reduce slug-caused damage to crops by 90%, according to the OSU researchers, and farmers in more than a dozen European countries can currently buy a product containing the worms — Nemaslug — to kill invasive slugs on their properties.

However, the EPA has yet to approve such a product in the U.S.

One of the things holding back the approval is the fact that the nematode species wasn’t discovered in North America until 2014, and even then, it was only found in one state (California).

Introducing the worm to the U.S. on a wide scale through Nemaslug or a product like it could have unintended consequences. But what if the nematode is already everywhere and we just don’t know it?

“If we can provide evidence it’s native, that makes a strong case for developing it as a bio-control,” McDonnell said. “But we want to make sure there are no effects on native slugs or snails. We don’t want bio-control gone awry. That’s very, very important.”

With that in mind, the OSU researchers set out to see if they could find the microscopic worm somewhere in the state of Oregon — and after three years of hunting, they struck gold right on OSU’s campus.

The team had set up traps along the perimeters of the school’s agriculture fields, hoping to catch slugs that had been infected by nematodes.

Once they did, they then extracted and sequenced the parasites’ DNA to determine whether they were P. hermaphrodita or another nematode species (there are thousands, if not millions).

Now that they’ve confirmed the presence of the worm in Oregon, they plan to study whether North American slugs are as susceptible to it as their European counterparts.

If so, that information could help convince regulators to approve a product like Nemaslug, giving farmers a more effective, less environmentally damaging way to combat their slug woes. 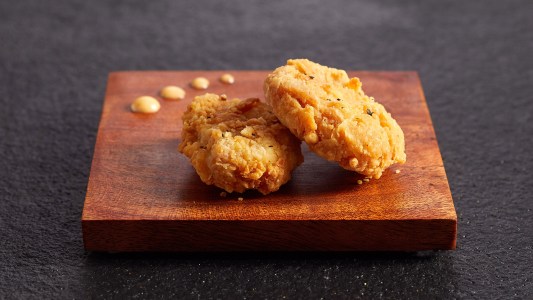 In a world’s first, Singapore has approved the sale of cultured meat, a major win for the meat alternatives industry.