A new kind of oceanographer, named Icefin, has taken a deep-dive underneath Antarctica’s ice sheet in search of answers about one of the continent’s fastest melting glaciers, the Thwaites Glacier, as part of a project called MELT. While human oceanographers would balk at enduring such frigid conditions — never mind the lack of oxygen — Icefin, as a semi-autonomous, remote controlled research vessel, is just the bot for the job.

Data from Icefin’s dive could not only help researchers better understand what’s to come for Earth, as the glacier melts, but could also help hone research tactics for eventual autonomous missions in the frozen oceans on the moons of Europa and Enceladus.

Don’t let its slim, torpedo-like shape fool you — Icefin is a researcher, not a fighter. Just under 4 m (about 13 ft) long and 23 cm (9 in) in diameter, the slim profile of this underwater vehicle is designed to help it slip through narrow boreholes in the Antarctic ice, while still carrying a full array of sensors onboard.

The vehicle’s standard sensors include HD cameras with laser ranging and scaling, salinity and temperature readers, and sonar systems. Icefin’s modular design allows it to be used for a variety of different science operations — including the projects RISEUP and OAST, which are focused on Icefin’s interplanetary capabilities.

Mysteries Beneath the Ice

But when it comes to MELT, Icefin’s ambitions are a little more terrestrial. The joint U.S. and U.K. project is focused on learning more about the changing conditions of the Thwaites Glacier. The Thwaites Glacier is not only huge — roughly the size of Britain or Florida — but is also one of the world’s fastest melting glaciers, with the amount of ice flowing from it nearly doubling in the past 30 years.

While the cause of this melting may seem straight-forward (looking at you, climate change), the mechanisms behind the melt are actually much more complicated, and researchers say they can vary from glacier to glacier.

When it comes to Thwaites, the research team — and Icefin — are focusing on the glacier’s “grounding line,” where the glacier loses contact with the ocean floor and transforms into a hovering ice shelf. The behavior of warm water at these grounding lines isn’t well understood and MELT hopes to learn more about how this interaction could affect increased ice flow from the glacier.

A better understanding of Thwaites’ melt behavior can help scientists more accurately predict what its contribution to rising sea-levels might be.

After five days of “intensive fieldwork,” the MELT team announced on Twitter the successful completion of the mission’s first stage. To prepare Icefin for its watery entrance, the MELT team first had to use hot-water drilling to bore holes into the ice, and then control the robot remotely as it explored the ocean’s icy depths.

As reported by the Icefin account, the team completed five dives and collected a whopping five terabytes of data (as well as “a little ink from a surprised squid”) that can now be analyzed above sea-level.

With one successful site under their belts, the team is now moving upstream and beginning preparation for drilling a second hole — weather permitting. The mission is set to last through 2023, so there’s still plenty of science ahead, for both the MELT team and their robotic oceanographer. 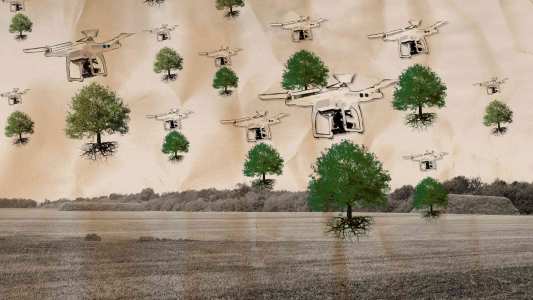