Nuclear energy is capable of creating vast amounts of power without carbon footprint-stomping emissions (there are some byproducts we need to deal with, but that’s what nuclear tombs are for, right?) at a scale and consistency difficult to match with wind and solar.

But there’s barriers to widespread, French-style adoption of nuclear power beyond public perception, political will, and thousand-year nuclear waste: fuel.

The power behind nuclear power comes from rending uranium atoms; a tiny amount of the element unleashes energy many magnitudes greater than other fuel sources.

Uranium occurs naturally in rocks, soil, and water, but is generally extracted at scale from uranium mines — which is considered a finite resource.

There’s another source of uranium, a vast source: the ocean. The trick is getting it out.

Now, a team of researchers at the Indian Institute of Science Education and Research (IISER) in Pune have created a gel that pulls over 95% of uranium from seawater.

Their technique “introduces the concept of extracting uranium from natural seawater may lead to an unlimited supply of uranium at an economically affordable cost,” principal investigator and IISER chemistry professor Sujit K. Ghosh told IndiaToday.in.

Because it is found in such low concentrations, pulling uranium from seawater at scale hasn’t been economically feasible, Reid Peterson of the Pacific Northwest National Laboratory (PNNL), told New Scientist in 2021.

Researchers around the world, including at PNNL, have been grinding away at that bottom line. A team of researchers at the Chinese Academy of Sciences in Beijing created a polymer membrane with a structure similar to blood vessels that absorbed 20 times the uranium previous materials had, according to New Scientist.

And the advances keep coming.

Uranium occurs naturally in rocks, soil, and water, but is generally extracted at scale from mines. There’s another source of uranium, though, a vast source: the ocean. But the trick is getting it out.

“MOFs are perhaps most famous for their extraordinary porosity and surface area,” Johns Hopkins chemists wrote in a Communications Chemistry article.

IISER’s MOF was able to pull 96.3% of uranium from natural seawater samples in just two hours, Ghosh told The Indian Express. The team took seawater from the Arabian Sea, off the coast of Mumbai.

“Combined with exceptional selectivity, record capacity, ultrafast kinetics, and long service life, this material could be a potential candidate for the efficient extraction of uranium from natural seawater,” Ghosh told IndiaToday.in. 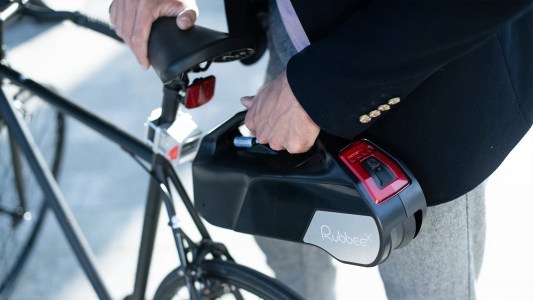 The Rubbee X is a simple e-bike conversion kit that could help get more people out of gas-powered cars and onto climate-friendly bicycles.

Transportation
This simple kit turns your regular bike into an e-bike in minutes
Subscribe to Freethink for more great stories
Subscription Center
Challenges
Video
Freethink
Subscribe
We focus on solutions: the smartest people, the biggest ideas, and the most ground breaking technology shaping our future.
Subscribe