What is the sound of a recovering ecosystem? Abe Borker knows.

As a seabird biologist at the University of California, Santa Cruz, Borker once counted the calls of individual nesting seabirds. Now he listens to soundscapes — the totality of the sounds of nature — and hears beyond the cacophony of white noise.

Sifting Through the Noise

“Ecoacoustics” is an emerging field of research. It is like bioacoustics, which focuses on the sounds made by or impacting individual organisms, but more holistic. Instead of chasing down isolated animal sounds, researchers put a recording device in the middle of an ecosystem, such as a forest, and pick up sounds made by animals, insects, weather, and even humans. They are using all of the acoustic properties of a location to answer ecological questions.

Ecoacoustic researchers put a recording device in the middle of an ecosystem, such as a forest, and pick up sounds made by animals, insects, weather, and even humans.

“A lot of bioacoustics has been focused on individual signals in a vacuum. I think ecoacoustics recognizes that none of these things exist by themselves. That whale is communicating against the backdrop of noise from ships and noise from fish and all sorts of stuff,” Borker says.

Borker wanted to know if he could use soundscapes to measure ecosystem health. He listened to recordings of islands in the Bearing Sea to find out if the noise could predict the outcomes of local landscape restoration efforts. In a study published in September in Restoration Ecology, he found that, indeed, the soundscapes indicated that the islands were recovering.

Because of climate change, over half of the habitats from Krause’s 5000 hours of recordings can no longer be heard in their original form.

The Aleutians are a chain of islands that jut off the tip of Alaska. In the 1800s, fur trappers introduced foxes to the westernmost islands, which caused a decline in the number of seabirds. When the islands became a federal wildlife refuge, the government began removing foxes to restore the seabird populations. Now, there are islands with foxes, islands without, and some that never had them at all.

It’s a little like trying to understand the magnificence of Beethoven’s 5th Symphony by extracting the sound of a single violin player, out of the context of the orchestra, and hearing just that one part.

“This suggests that we don’t necessarily have to (count individual bird calls) to get a really coarse and rapid assessment of how those islands are recovering,” he says. “We can use indices of acoustic complexity and look at a more holistic measurement of how complex and how rich the soundscape is.”

The Birth of a Field

Bernie Krause, a soundscape ecologist and founder of Wild Sanctuary, says that “people need to listen to the natural world.” He is concerned that people are drawing too far from nature, and that climate change will soon get the better of us.

Krause has an archive of 5,000 hours of natural soundscapes recorded since 1968. He says that, because of climate change, over half of the habitats from those recordings can no longer be heard in their original form.

“I turned on that recorder, and I heard the sound of the entire habitat. It completely changed my mind. I thought to myself, ‘My God, this is where the information is.’ Not in a collection of individual sounds.”

Borker considers Krause a pioneer in the field of ecoacoustics, and some would argue that he is the founder. For Krause, who is also a trained composer, it all began in 1968 when he was recording sounds for an album called In A Wild Sanctuary. With a recorder in hand, Krause ventured into the forest.

“I turned on that recorder, and I heard the sound of the entire habitat. It completely changed my mind. I thought to myself, ‘My God, this is where the information is.’ Not in a collection of individual sounds.”

It was Krause who first described the “acoustic niche” hypothesis. Animals in an ecosystem compete for resources, like food, water, and space, to survive. Their vocalizations are also crucial to their survival. They need to be heard and not masked by other sounds. So, the organisms also compete for space in the soundscape. They all settle into their own bandwidth — insects, birds, mammals, reptiles, each having their own niche in which to vocalize.

To Krause, it no longer makes sense to take an animal sound out of the ecosystem context when trying to understand their relationship to the habitat.

“It’s a little like trying to understand the magnificence of Beethoven’s 5th Symphony by extracting the sound of a single violin player, out of the context of the orchestra, and hearing just that one part,” he says.

Hearing Hope in a Soundscape

Ecologist Matthew McKown, founder of Conservation Metrics, says that conservation efforts are already strapped for cash. There is little left for measuring how successful they are. Ecoacoustics could be a solution.

McKown launched Conservation Metrics to provide cost-effective ways to measure the outcomes of conservation efforts. In a collaborative project with the Nature Conservancy, McKown used ecoacoustics to measure the effectiveness of restoring shorebird habitat with manufactured wetlands.

Shorebirds are declining in numbers. Greg Golet, an ecologist at the Nature Conservancy, noticed that during their fall and spring migrations, suitable habitat is sparse. There are only about 70,000 acres of managed wetlands in California. But there are seven times as much farmland, most of which lies fallow during the shoulder seasons. So Golet recruited local farmers to flood their fields and create surrogate wetland habitats. He hopes this effort will bolster the shorebird population.

That’s where McKown comes in. Instead of traditional, time-consuming, costly surveys — where researchers sit near the fields with their binoculars, tallying the number of birds they see — McKown deploys recording devices and analyzes the soundscape.

“They are complementary approaches. The acoustics is like a window into a new world that we haven’t thought about much,” Golet says. “I was excited. It made all kinds of sense to me. Given how the animals communicate, we’re listening to their world instead of just looking in on it.”

The field of ecoacoustics is growing. The International Society of Ecoacoustics is now in its third year, with several hundred participants at the annual meeting. As it evolves, both Borker and McKown expect to see more automation and computer learning applied to analyze the soundscapes.

But, even a computer can’t replace the trained musician’s ear. Have a listen — as Krause says, ecosystems really are like orchestras. There are flutes, violins, and woodwinds, all playing a complementary tune.

And if instruments drop out, as species diversity is lost to climate change, you’ll still have a song, but it isn’t quite as beautiful. 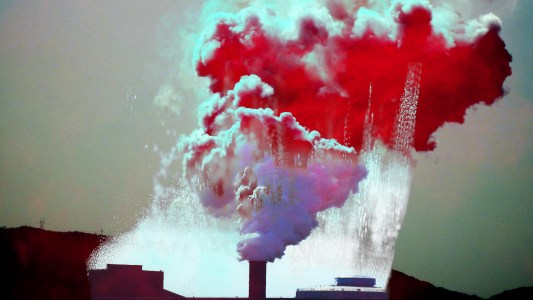