It is a strange sight: a massive cargo ship propelled, in part, by a giant kite.

The prototype — an automated Seawing kite, fitted onto an Airbus cargo ship — was created by Airseas, a French startup. The experiment is designed to bring wind power back to global shipping, centuries after steamships replaced it.

And, as weird as it looks, it just might work.

Release the kite: The Ville de Bordeaux, a 154-meter ship that moves aircraft structures, will be the guinea pig in this experiment.

Starting in January 2022, the vessel will undergo six months of testing to demonstrate that the giant kite can significantly cut down on fuel consumption and emissions.

“Given the urgency of the climate crisis, the world needs to see a drastic reduction in carbon emissions now. In shipping, we can achieve this by using the full set of tools we have available to us today. Wind propulsion is one of these.”

Airseas projects the kite could cut fuel costs up to 20%, depending (of course) on the winds. And popular shipping routes already take advantage of the prevailing winds (which coincide with currents) to help push the ship along. Adding a kite would help significantly more.

During the testing phase, only a half-sized kite is being used. But the full-sized parafoil kite, at 5,400 square feet (a little larger than an NFL end zone), can be automatically hoisted up a mast. Once it catches the wind, it is released on a long cable and flown ahead of the ship, reports New Atlas.

The Seawing’s computers can monitor wind speed and interface with the ship’s navigation system to project the most efficient route possible to leverage the wind.

Even better, Airseas says the Seawing system can be retrofitted to nearly any type of cargo ship.

On the wind: Airseas isn’t alone: sails may be making a comeback. As shipping companies aim to reduce their carbon emissions, while saving on fuel costs, they are exploring a variety of old-school options, with a modern twist, including creative airfoils, wings, and inflatable sails.

Michelin, the tire manufacturer, revealed a new take on sails earlier this year. Their tall, marshmallow-puffed sails can be inflated with the press of a button and automatically pivot to harness the wind. The sail system, which can be retrofitted onto large freighters, is designed to work with the ship’s engine when the winds are favorable to propel the vessel, while decreasing fuel consumption and carbon emissions. Each sail is 1,076 square feet, and, depending on the size of the boat, it could take two or three sails.

“Our aim is to contribute to the decarbonization of maritime transport,” Benoit Dailliez, leader for the company’s “wing sail mobility” (WISAMO) project, told CNN.

Another company, the U.K.-based BAR Technologies, hopes to put its “WindWings” onto bulk cargo ships by next year. But quite unlike Micheilin’s inflatable sails, which are lightweight and flexible, the WindWings are made of steel. The 150-foot-tall rigid panels are planted perpendicular to the deck but can fold down when needed (if the wind blows foul, for instance, or during storms).

“New technologies that help to lower fuel consumption and carbon emissions like WindWings have been rigorously assessed to long-standing, high quality technical standards. We look forward to seeing the system in operation when it hits the water,” Per Marius Berrefjord, at DNV Maritime, told ShipInsight.

Another ship, the Oceanbird, is a 650-foot, car carrier-sized vessel with telescoping wings. Unlike the other cargo-sailing hybrids whose sails work with the engine, these giant vertical wings are meant to propel the boat on their own, reports CNN Travel.

“Given the urgency of the climate crisis, the world needs to see a drastic reduction in carbon emissions now. In shipping, we can achieve this by using the full set of tools we have available to us today,” said Vincent Bernatets, CEO and Co-Founder of Airseas. “Wind propulsion is one of these and will play an essential role in helping shipping achieve its much-needed decarbonization transition.”

The bigger picture: None of these technologies are proven yet, and even the huge, 154-meter Airbus ship that is testing the Airseas kite is a shrimp compared to many of today’s ultra-large container ships, which are more than twice as long and multiple times its weight.

But if sail technology, like Airseas’ kite, can deliver on its 20% emissions cut, it could significantly cut down on emissions from bunker fuel — the very powerful but very dirty oil that powers global shipping. And if companies save on fuel by retrofitting older vessels to catch the trade winds, it could make cleaning up the industry profitable, too. 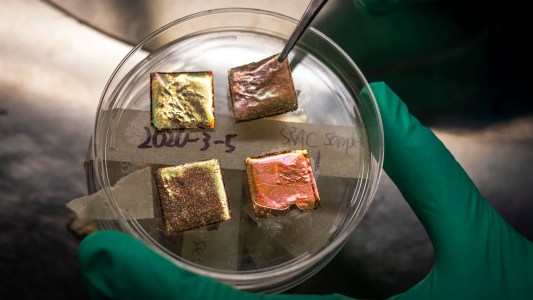 Scientists have invented an all-season smart-roof covering that keeps homes warm in the winter and cool in the summer. It uses a phase-shifting material that doesn’t require additional electricity.

Climate Crisis
How buildings can adapt to the seasons
Subscribe to Freethink for more great stories
Subscription Center
Challenges
Video
Freethink
Subscribe
We focus on solutions: the smartest people, the biggest ideas, and the most ground breaking technology shaping our future.
Subscribe