In a giant leap for bioprinting, researchers have 3D printed human cartilage on the International Space Station — hinting at a future of printing entire body parts during space travel.

Who needs a kidney when you can 3D print a new one? Replacement parts could come in handy for long-haul astronauts or Martian colonists since human body parts have been shown to atrophy in space and low-gravity environments. A Russian startup called 3D Bioprinting Solutions believes that they can make bioprinting spare organs, tissues, or other body parts a promising option for future space travelers.

The company has had a busy week, having just announced a partnership with KFC to 3D print their — already mysterious — chicken nuggets using meat grown in a lab. Now, they have also revealed the results of a study conducted in space by Russian cosmonaut Oleg Kononoenko in 2018. The research, published July 15 in the journal Science Advances, shows how Kononoenko printed and assembled human cartilage cells in near-zero gravity on the space station.

Kononoenko used a 3D print machine called BioprinterOrgan.Aut to perform tissue engineering in space, using two opposing magnets to float and assemble cells in a process called “magnetic levitational bioassembly.” The magnetic field pushes the cells toward each other, aiding in assembly by stitching the cells together into tissue.

“One could imagine not too far in the future that if we colonize Mars or do long-term space travel, we might want to do experiments where we build functional tissues in space, and test them in extraterrestrial environments,” Stanford researcher and author of the paper, Utkan Demirci, told IEEE Spectrum.

The goal is to 3D print entire body parts in space and artificially mimic other biological processes. Doing so could help minimize the effects of prolonged time in space, allowing astronauts to travel further.

3D Printing
3D-printed wood furniture could ship flat, then dry into shape
A new way of 3D printing wood that takes advantage of warping could change how we build things in the future.
Up Next 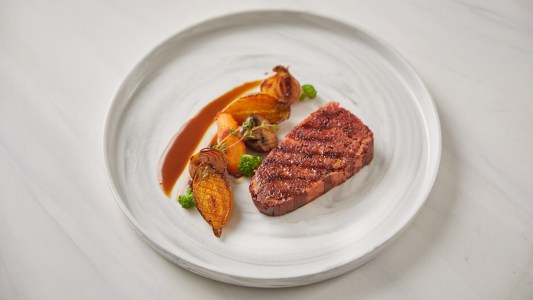 Food
3D-printed vegan steak is heading to restaurants in 2020
Subscribe to Freethink for more great stories
Subscription Center
Sections
Video
Freethink
Subscribe
We focus on solutions: the smartest people, the biggest ideas, and the most ground breaking technology shaping our future.
Subscribe