A crisis app for Afghans is using crowdsourced data to deliver real-time information on dangerous activity in the wake of the Taliban takeover.

“We just want to alleviate some of the anxieties that Afghans have in these uncertain and volatile times,” Sara Wahedi, founder of Ehtesab, the startup behind the app, told the Financial Times.

The challenge: In 2001, U.S. forces invaded Afghanistan, deposing the Taliban. Now that the last of those troops are leaving, the Taliban has regained control of the nation, taking its capital, Kabul, on August 15.

Since then, life in Kabul has been exceedingly chaotic and dangerous for residents.

In addition to power outages and roadblocks, they’re also navigating gunfire, suicide bombings, and other acts of violence — and getting up-to-date information on all this activity is incredibly difficult.

“[The Taliban] are raiding homes and cracking down on journalists, [and] also whoever is involved with the aspects of reporting,” Wahedi told Rest of World.

A crisis app for Afghans: Ehtesab’s goal is to close that information gap with an app for Afghans that uses crowdsourced data to provide real-time updates on the situation in Kabul.

Vetted users report activity through a private WhatsApp group, and the startup’s 20-person team — all Afghans under the age of 25 — then fact-checks the tips.

“This is an Afghan-led and funded, fully 100 percent Afghan team working on this,” Wahedi said.

App users can opt to receive push notifications about activity near their location. They can also submit their own tips, along with video or audio of incidents.

The current situation: Ehtesab launched its app for Afghans in March 2020, and prior to the Taliban takeover of Kabul, the startup was able to source information from police and government organizations.

It’s now having to adapt to life without those resources and “find different ways of garnering data about the city and security,” Wahedi said.

The startup is also having to cope with the increased threat to its staff.

Any information about female members has been wiped from its website, and the entire team is now working remotely — Wahedi from Canada, where she has dual citizenship, while the rest are still in Afghanistan.

To minimize its risk, the startup has stopped using the word “Taliban” in alerts, too, instead opting for general terms such as “roadblock” to warn users of danger in an area.

Looking ahead: Ehtasab is currently raising money through a GoFundMe campaign to hire full-time workers and expand its app’s capabilities. Wahedi also tweeted on August 26 that multiple investors have reached out to work with the startup in the wake of the Taliban takeover.

For now, she’s hopeful that internet access won’t be cut off in Kabul given that the Taliban itself regularly uses the service and that Ehtasab will be able to continue its mission of helping Afghans stay safe.

“So long as the Taliban do not restrict internet access, people will turn to Ehtesab for information and what’s going on in the city,” she told the Globe and Mail. “This, especially if they keep on clamping down on journalists and people are forced to stay home.” 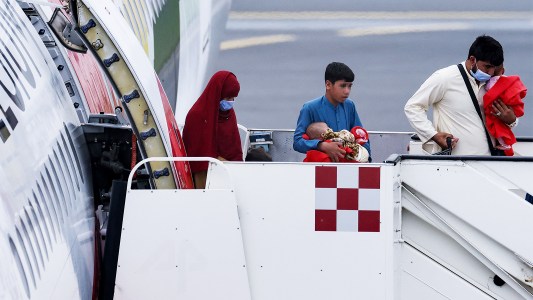 To help Afghans escape the Taliban, people have donated millions of airline miles to a nonprofit that secures flights for refugees.

Activism
Your airline miles can help Afghans escape the Taliban
Subscribe to Freethink for more great stories
Subscription Center
Sections
Video
Freethink
Subscribe
We focus on solutions: the smartest people, the biggest ideas, and the most ground breaking technology shaping our future.
Subscribe