If you’re looking for driverless vehicles at work, you may have better luck inside a warehouse than on the street.

While Silicon Valley’s vision of zipping around city streets hands-free runs is slow to be realized, an autonomous forklift may soon be helping things get out the warehouse door — and to yours.

With OTTO Motors announcement of The Lifter, the field of self-directed robots has a new entrant — one its creators say is the most advanced yet.

“OTTO Lifter can make real-time decisions in complex environments,” Jay Judkowitz, OTTO Motors’ VP of product, said. “Unlike other autonomous forklifts in the market, OTTO Lifter can find a pallet if skewed, adapt behavior in highly-dynamic environments, and choose the best route on its own.”

OTTO’s autonomous forklift joins big names like DHL and Toyota in hoping that the robotic lifters will not only increase speed and efficiency amidst a severe labor shortage but improve safety, as well.

Heavy lifting: As continuing supply chain woes throw the wizard-behind-the-curtain world of logistics into the spotlight, demand for logistics help is rising, even as skilled labor — like forklift drivers — is tougher to come by, Axios reports.

According to industry publication DCVelocity, unemployment levels at their lowest rate in half a century have made it difficult for warehouses and distribution centers to attract adept operators, leading to a spike in autonomous forklift interest.

Combine that pure need with new guidance technologies that allow the robots to move without guidewires, magnets, or other paths, and the sci fi-sounding tech is attracting serious industry interest.

German logistics giant DHL has announced that its autonomous forklift will be moving 1,000 pallets a day when it is deployed in a Belgian Unilever warehouse this spring — and the robotic coworkers may improve human safety, too.

Forklifts account for 10% of injuries where they are in use, ZDNet reports, causing nearly 35,000 injuries a year just in the U.S.

Using similar sensors to those developed for autonomous cars, an autonomous forklift should be able to maneuver around its work environment, carrying thousands of pounds of goods to where they need to be safely.

Companies hope the forklifts can both relieve a skilled labor crunch and lead to a safer, more efficient workplace.

Robots at work: While perhaps not the most romantic vision of our robotic future, the autonomous forklift is already being put to work.

In Ohio, DHL and Crown Equipment began deploying them in the fall of 2021, the Dayton Daily News reported, in the first autonomous forklift rollout in the U.S.

The forklifts, which can be toggled between self-driving and manual operation, can work every day, all day, and are able to reach items up to 27 feet up and two pallets deep, the companies told the Daily News.

They credit the autonomous forklifts for a 20% increase in efficiency. 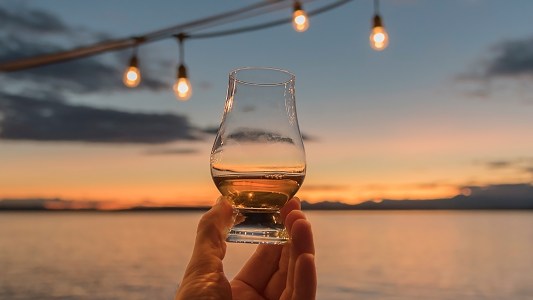 An “electronic nose” that can accurately identify a whiskey’s brand, region, and style could help combat the sale of counterfeit whiskey.

Inventions
Could you sniff out counterfeit whiskey?
Subscribe to Freethink for more great stories
Subscription Center
Sections
Video
Freethink
Subscribe
We focus on solutions: the smartest people, the biggest ideas, and the most ground breaking technology shaping our future.
Subscribe