To sniff out counterfeit whiskey, researchers created an “electronic nose” that can identify a whiskey’s brand with 96% accuracy.

The challenge: Whiskey is one of the most popular alcohols in the world, and there are more than 500 brands creating their own versions of the drink, with some bottles fetching hundreds, thousands, or even millions of dollars.

Scammers will fill expensive brands’ empty bottles with cheap liquor and sell them for a major profit.

A casual whiskey drinker might be able to tell a premium whiskey from the bottom shelf stuff, but even trained connoisseurs can have trouble identifying the exact whiskey they’re drinking. A buyer could bring a new bottle to a lab for chemical analysis, but that’s an expensive, time-consuming process.

Scammers take advantage of this difficulty in whiskey verification by buying expensive brands’ empty bottles, filling them with another, cheaper liquor, and then selling them to unsuspecting buyers for far more than they’re worth.

Sniffing out fraud: A team led by Steven Su from the University of Technology Sydney has now demonstrated that its electronic nose prototype (NOS.E) could help thwart the sale of counterfeit whiskey.

According to the team’s study, the device uses gas sensors to detect the different odors in a sample of whiskey. That data is then sent to a computer, where it’s analyzed by an AI that identifies the liquor’s brand, region, and style.

The e-nose knows: The team trained their prototype using multiple samples of six different whiskeys. The whiskeys were from three regions (two samples per region) and split evenly into two styles (single malt or blended).

After training, the e-nose was able to identify a sample’s brand name, region, and style with 96%, 100%, and 92% accuracy, respectively. State-of-the-art lab tests on the samples yielded similar results.

“[T]o have a rapid, easy to use, real-time assessment of whisky to identify the quality, and uncover any adulteration or fraud, could be very beneficial for both high-end wholesalers and purchasers,” said Su.

Beyond the bottle: Electronic noses can do more than sniff out counterfeit whiskey.

NOS.E could be trained to identify other types of alcohol or even perfumes, according to the UTS team, which has already demonstrated their tech’s ability to distinguish between legal and illegal animal parts, such as rhino horns, which could help stop their trade.

Other researchers have developed their own e-noses to assess food quality or identify signs of diseases, such as cancer and COVID-19, on patients’ breath in the hope of speeding up diagnoses. 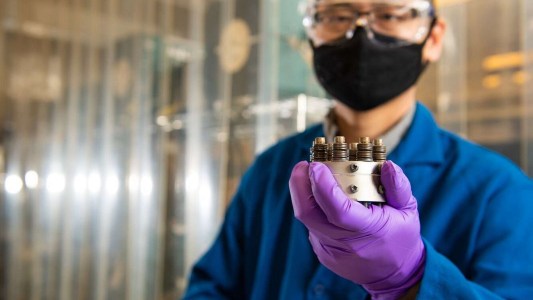