Every year, doctors in the U.S. diagnose 18,440 people with esophageal cancer, and, as with any cancer, early detection of the disease significantly improves a patient’s chances of overcoming it.

Now, a team of researchers in the Netherlands has trained an “electronic nose” to sniff out a precursor to esophageal cancer on human breath — giving doctors an opportunity to prevent an at-risk patient from ever developing the cancer in the first place.

The cancer precursor at the center of the study, which was published in the journal Gut, is called “Barrett’s esophagus,” and it’s characterized by the presence of abnormal cells in the inner lining of the esophagus.

The researchers wanted to find the signs that cancer could be on the way.

To diagnose Barrett’s esophagus, doctors must perform an upper endoscopy, a procedure that involves feeding a thin tube containing a light and a camera through a person’s mouth and down into their throats.

Not only is the procedure about as pleasant for patients as it sounds, it’s also expensive. That means that, while it might be worthwhile for people already showing symptoms of Barrett’s esophagus, it’s not well-suited for screening the general population for the condition.

That’s left scientists on the hunt for a cheaper, less invasive screening method, and it turns out that electronic noses — devices designed to detect scents — might be just what they’ve been looking for.

Scientists have known for decades that molecules called volatile organic compounds (VOCs) in a person’s breath can hold clues to their health. More recently, some studies have suggested that electronic noses could be useful in screening patients for VOCs linked to various cancers.

For their study, the Dutch team decided to see whether an electronic nose could effectively identify people whose breath contained VOCs indicating that they might have Barrett’s esophagus — they wanted to find the signs that cancer could be on the way — not cancer itself.

To that end, they asked 402 adults who were already scheduled for an endoscopy to breathe into an electronic nose for five minutes each.

Of those people, doctors would ultimately diagnose 129 with Barrett’s esophagus, 141 with acid reflux disease, and 132 with neither.

The researchers then had an electronic nose analyze the breath samples of 90% of the patients, training it to identify VOC patterns linked to a diagnosis of Barrett’s esophagus.

They then tasked the trained electronic nose with analyzing the remaining 10% of samples, which hadn’t been used for training. The results showed that it correctly identified patients with Barrett’s esophagus 91% of the time and those without it 74% of the time.

The researchers now plan to conduct another trial of the system, this time with 1,000 patients, but they’re already encouraged that their trained electronic nose could prove to be a viable alternative to endoscopies for diagnosing the condition.

“If you have a test available that is non-invasive and easily (detects) patients at risk of developing esophageal cancer, then of course the participation rates will be much higher as compared to using upper endoscopy,” co-author Peter Siersema told The Guardian, adding that “this test takes only five minutes.” 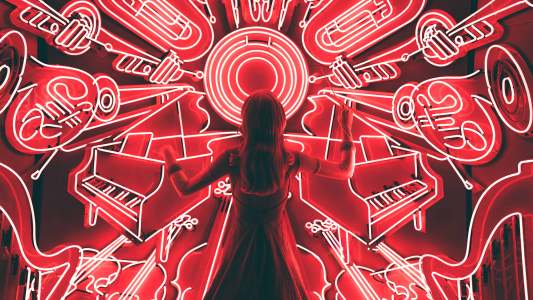 Two musicians built an algorithm that could write every melody in the popular music range — and then released the melodies into the public domain.