How might your life change if you lost an arm? For Jason Barnes, the loss was especially challenging. Before losing his right arm in an electrical accident, Jason was an avid drummer.

“Drums are probably the most physically demanding musical instrument there is,” Jason says. “I mean it’s a workout—all four of your limbs and your whole body has to work in synchronicity to be able to produce those kinds of sounds.”

After the accident, he wasn’t sure if he’d ever be able to drum again.

A few days later, “with bandages on and everything,” Jason proceeded to play the drums again after fastening a drumstick to his elbow. “That moment right there was the breaking point,” he says. “The point for me to accept what happened, while also reminding me that, ‘Hey, this is still possible. You can still do this.'”

Do that he did and word quickly spread of Jason’s efforts to continue drumming, despite the loss of his arm. One thing led to another, and he was eventually introduced to Gil Weinberg at Georgia Tech.

As it happened, Gil and his team had been exploring the intersection between robotics and music for years. “Before I met Jason,” Gil explained, “I was working on robots that played by themselves. All of our robots are designed to listen like humans but like, play like a machine.” These robotic musicians could play instruments and even improvise in real time with human collaborators.

“I always tried to connect humans to the process so, the robots listen to the human and then it responds. We try to develop robotic musicians that will inspire us humans to play music in a new way and to think about music in a completely new, interesting direction.”

But while Gil had been working to add humanity to his robot musicians, he’d never before tried to add robotics to a human musician and he found the opportunity to be really exciting.

“We came to the lab here and tried to figure out what we can do to help Jason play like he used to,” says Gil Weinberg, director of Georgia Tech’s Center for Music Technology. “He wanted to be able to hold the stick with both tight and loose grips to have the same expression that he used to.”

After teaming up, however, they decide not just to restore Jason’s original capability, but try and go beyond what a human drummer could do on his own.. “We asked ourselves, ‘Why not try to make a prosthetic that is even better than the original?” Jason says. “Little did I know that five year later, we would be on the verge of developing some of the best technology for amputees.”

The result is that Jason can now play a superhuman 40 hits per second—twice as much with one arm as any living drummer can do with two. With his ultrasound-directed prosthetic, his robotic arm can finally keep up with the fast-moving signals that his brain always wanted to relay.

Adds Gil, “At the end of the day, this is all about trying new things, and questioning everything, and trying to create music that will inspire you and will create amazing experiences. Allowing people who have disabilities to show that they’re not only not disabled, they’re actually super-abled.” 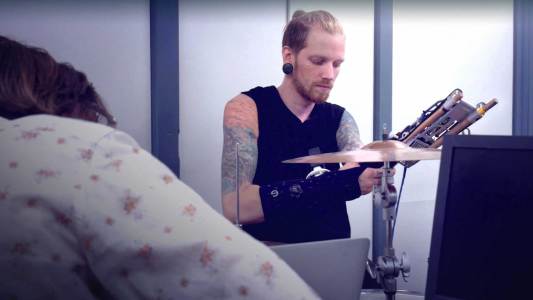 Jason Barnes lost his arm in a horrible accident. Then he became the fastest drummer in the world…