When it comes to scholastic success, intelligence and industriousness are distributed equally across different groups of schoolchildren in the U.S. But access to technology is not.

A 2021 Pew Research Center survey found that about 43% of U.S. households with incomes below $30,000 don’t have access to broadband internet or to a desktop or laptop computer, while about one-quarter don’t have a smartphone. Alarmingly, these shares haven’t changed much over the past few years.

This is the so-called digital divide. The gap has been a major concern over the past decade among policymakers and educators who report that many low-income children are being left behind as education systems increasingly rely on technology to teach students.

For Brad Johnston, the scope of the digital divide became apparent during a conversation he had with his mom and sister in 2014. Around then, many schools were beginning to administer standardized tests on computers instead of paper.

Johnston’s mom and sister, both of whom were elementary school teachers at low-income schools, noticed a concerning trend: many of their students were falling behind, even though they were intelligent and hard working.

The problem was that they weren’t familiar with using computers.

“If you’re wealthy, you can get the best education ever,” Johnston told Freethink. “There’s over 300,000 educational apps out there — if you have a high-end computer, high-speed internet, and everything else. But if you don’t have that stuff, you are being pushed further down the chain than ever before.”

The digital divide led Johnston to start Tanoshi, an Oakland-based startup that sells affordable tablet computers featuring competitive specifications, educational apps, and parental controls, none of which collect any data on the children who use the computers.

“It does everything a Chromebook can do, but really the benefit to it is we only preload educational content,” Johnston told Freethink.

Tanoshi sells two tablets: the 2-in-1 ($199) and the Scholar ($299). Geared toward kids ages 5 to 17, both models are Android-based, come with a touch screen and detachable keyboard, and can be operated with or without internet access.

The educational apps are designed to help kids learn all sorts of material, from mathematics to computer basics like typing.

Tanoshi places specific emphasis on teaching kids the basics of programming, offering apps like a Nancy Drew-themed coding game and Scratch, a platform where kids can create their own games and animations through simple coding techniques.

“We want to give underserved communities exposure to coding,” said Lisa Love, Tanoshi co-founder and CMO.

With a global value of $1 billion, breaking into the tablet computer industry as a startup was no easy feat. But Johnston saw an opportunity when he founded Tanoshi in 2016: Most of the big names in the industry were developing cutting-edge tablets and selling them at a premium, but few were building more minimalistic tablets outfitted with hardware and software geared toward schoolchildren.

Johnston decided to go all in. He invested $150,000 of his own money and spent three years researching, experimenting with prototypes, and meeting with various producers.

At first, none of the producers he approached were interested. After all, most factories require a minimum order of about 3,000 to 5,000 units for the project to make economic sense. Tanoshi didn’t have that kind of capital.

But Johnston finally came across a producer who liked Tanoshi’s vision and agreed to produce a relatively small order of 500 units. That first batch sold out quickly.

“Selling out just launching a product, it’s such a great feeling because we knew that we had a demand for our product,” Love told Freethink.

However, there’s an obvious setback to selling tablets at the cheapest price possible: profit margins are slim. Tanoshi also faces a problem that’s familiar to many startups, which is that it doesn’t have enough business history for lenders to feel comfortable issuing loans.

Tanoshi has sold more than 17,000 tablets and has generated more than $4 million in revenue. Still, the company continues to look for new ways to raise capital.

“We’re very close from being profitable,” Johnston told Freethink. “We just need a little more on the investment side. We’ve tapped out our friends and family, we can’t go back there.”

Despite financial struggles, Tanoshi is confident in its long-term success. A handful of private equity firms have already approached Johnston and his team about acquiring the company. The offers were too low. What’s more, Tanoshi wants to make sure that whoever acquires the company is going to continue the goal of closing the digital divide by providing high-quality technology at affordable prices.

“Whenever we hear back from parents about their child who is motivated to learn, having fun learning, it’s cool to hear that,” Johnston told Freethink. “And we’re like, ‘okay, we’re on the right path.’”

The National Education Association estimates that approximately 13.5 million children ages 5 to 17 lack access to a computer or broadband internet. Although low-income families often have some access to the internet, many remain under-connected — lacking sufficient internet quality to perform modern online activities, including at-home learning.

Tanoshi hopes to help those populations by reducing the barriers to entry for modern technology, and by providing low-income families computers that can run educational apps without a broadband connection.

To Johnston, the company is bound to multiply in value over time. But he made it clear that Tanoshi will never abandon its goal of putting more affordable computers in the hands of students who need them most.

Getting there will require investors who share that vision of profit and purpose.

“The sky’s the limit once you get the right people behind you.” 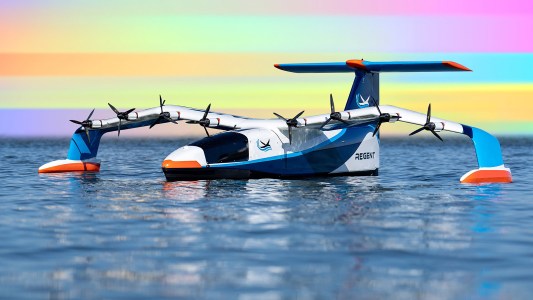 Flying low above the sea, “seagliders” from Boston-based company REGENT may be cruising Hawaii by 2025.