A New York City startup is constructing small homes quickly and cheaply — by building inflatable fabric forms the size and shape of houses and then pumping them with concrete.

The challenge: The US is in the midst of a massive housing shortage, and a huge driver of it is the dwindling construction of smaller “starter” homes — only about 7% of single-family homes built in 2019 were under 1,400 square feet, compared to 40% in the 1980s.

The smaller homes that are being built, meanwhile, are selling for prices that put them out of reach for the typical first-time home buyer.

It starts with the delivery of a house “form,” made of PVC fabric, to the construction site. This looks like a deflated air mattress at first, but once it’s filled with air, it takes on the shape of a small house, with walls and a roof.

A second form is also inflated on the inside of the first. Its purpose is to provide support during the next stage, when wet cement is pumped in while air is removed from it.

The concrete cures for a couple of days before the support form is deflated so it can be reused later. The PVC house form is left in place — it helps cut down on energy costs by providing an airtight, watertight barrier around the concrete house.

“For our 100-square-foot and 200-square-foot prototypes, the inflation took seven to 10 minutes with air,” CEO Alex Bell told New Atlas. “Then the concrete pump filled them in 1.5 hours. Including labor, our prototypes only cost $20 per square foot. This is significantly cheaper than anything else.”

Rebar reinforcements need to be added, too, but Bell told New Atlas that the company is working to have those pre-installed in the form prior to shipping, reducing some of the labor costs.

Looking ahead: Automatic Construction is in the process of building a concrete house for one customer in New York and has contracts signed with two others, according to Bell. It’s also inked a deal with a “large commercial contractor” for a structure.

It’s not clear how large those will be, but the prototypes the company has built so far are better described as tiny houses than starter homes — they might be large enough for one person, but they aren’t likely to accommodate a family.

Automatic Construction is testing a 650-square-foot, two-story concrete house design, though, and claims its technique could be scaled up for larger structures — including commercial buildings, city skyscrapers, or even houses on Mars.

Even if those out-of-this-world applications never come to fruition, the company’s smaller concrete homes have the potential to help solve the housing shortage, along with other alt-construction methods, such as 3D-printing and folding homes. 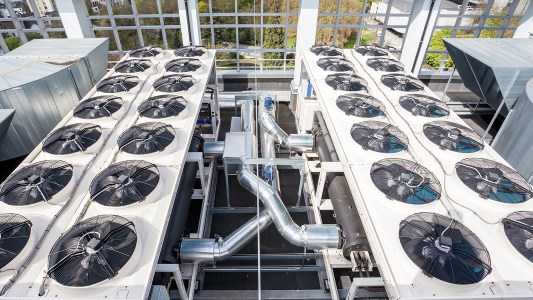 Climate Crisis
New MIT system could cool buildings up to 10℃— without electricity
Subscribe to Freethink for more great stories
Subscription Center
Sections
Video
Freethink
Subscribe
We focus on solutions: the smartest people, the biggest ideas, and the most ground breaking technology shaping our future.
Subscribe