Organ transplants are a race against the clock.

Once removed, an organ is only viable for so many hours. If surgeons can’t transplant it before time runs out, they have no choice but to discard the potentially life-saving body part.

Even if the organ does arrive within the designated window, getting it to a recipient as quickly as possible is important — just one extra hour outside a body can decrease the amount of time a donated organ remains functional in its recipient.

We saw what would be a 15 to 20 minute drive done in four minutes.

Drones show promise in helping hospitals overcome this challenge — in 2019, researchers at the University of Maryland used a delivery drone to transport a kidney that was successfully transplanted into a person

But that flight was only three miles long. Now, drone delivery company MissionGO has pushed the limits of drone delivery — transporting an organ a record-breaking 10.3 miles.

On September 17, MissionGO partnered with the Nevada Donor Network to demonstrate its unmanned drones’ ability to transport organs with two flights.

For the first, a delivery drone flew human corneas between two Las Vegas medical facilities 2.5 miles apart. This was to demonstrate the drone’s ability to transport organs in an urban environment, where traffic congestion or construction can cause delays.

“We saw what would be a 15 to 20 minute drive done in four minutes,” Nevada State Senator Melanie Scheible, who was onsite for the demonstration, said.

During a second flight, a MissionGO drone carried a kidney from an airport to a location more than 10 miles away — the farthest a delivery drone has ever transported a human organ.

According to Ryan Henderson, MissionGO’s lead unmanned aircraft systems pilot, about 90% of the hospitals in the vicinity of the airport are within that range, meaning the company’s delivery drone could transport an organ between the airport and most of the facilities.

All of the organs transported during the Las Vegas flights were designated for research, not transplantation.

When Can Organ Transplants Take Flight?

The use of drones in healthcare isn’t limited to organs. Blood samples, vaccines, medications, and, most recently, coronavirus tests have all been delivered via drone, often in parts of the world where ground transportation is particularly difficult.

In the U.S., drones are strictly regulated — the Federal Aviation Administration generally prohibits flying one outside of a pilot’s line of sight, so a delivery drone company would need to convince the agency its devices deserve to be an exception to that rule.

No one wants a pair of organ-carrying drones to collide midair, either, so operators would need to figure out how to manage air traffic before fleets of the devices could take to the skies.

They’d also need to be able to ensure that the devices are impervious to hacking, capable of withstanding all sorts of weather conditions, and much more.

For now, then, MissionGO’s next step is more testing. Specifically, they’ll be looking to increase the distance their drones can cover and study any potential effects of the flights on their precious cargo.

Agriculture
3 ways autonomous farming is driving a new era of agriculture
Could autonomous tractors, drones, and seed-planters fill the growing labor shortage in the agricultural industry?
By Kayleigh Bateman

Climate Crisis
Digital technology can cut global emissions by 15%. Here’s how.
The grand challenge for humanity is to ensure that groundbreaking technologies have a clear purpose for our planet.
By Johan Rockström and Börje Ekholm 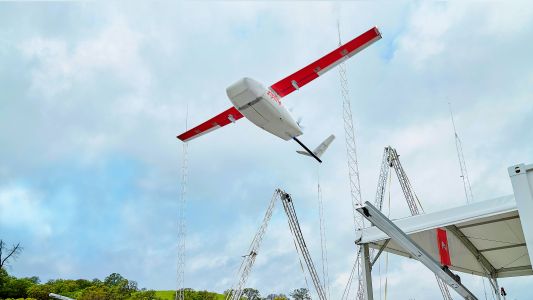 Walmart’s drone delivery service will deliver wellness products to customers within a 50-mile radius of their headquarters in Arkansas.

Drones
Walmart and Zipline launch a 1-hour drone delivery service that will parachute-drop your purchases
By Teresa Carey
Subscribe to Freethink for more great stories
Subscription Center
Sections
Video
Freethink
Subscribe
We focus on solutions: the smartest people, the biggest ideas, and the most ground breaking technology shaping our future.
Subscribe