Walmart has teamed up with Zipline to launch a trial for an on-demand drone delivery service.

Early next year, Walmart will service customers within a 50-mile radius of their headquarters in Arkansas, promising to deliver health and wellness products within an hour of purchase. They hope to expand to include general merchandise in the future. If the trial is successful, it could be the start of a nationwide drone delivery service.

“Trial deliveries will take place near Walmart’s headquarters here in Northwest Arkansas using Zipline’s proprietary technology which is, simply put, really cool,” Tom Ward, a Senior VP at  Walmart, wrote in a blog post. The stork-like delivery service would drop a package at your doorstep with a mini-parachute attached.

The partnership is a smart move, given that Zipline, the world’s largest drone delivery network, has a proven track record. In 2016, they began delivering blood to patients in Rwanda’s remote areas, bypassing rugged terrain with their fixed-wing drone aircraft. Since then, they’ve expanded to include regions of Tanzania and China — delivering more than 200,000 medical products to thousands of facilities.

It will be interesting to see which retail giant, Amazon or Walmart, fully incorporates a drone delivery service first. Both have been building momentum in that direction for years.

In August, Amazon got approval from the FAA to deliver packages by drone, officially deeming the online retailer an “air carrier.” Imagine clicking “buy” on your Amazon shopping cart and getting a copy of the prequel to the Hunger Games within 30 minutes of its first availability — totally worth it. Amazon aims to be that fast.

But Walmart has also been gaining momentum. They started conducting drone delivery tests in 2015. Then, the following year, they began testing warehouse drones equipped with cameras to take over the monotonous task of counting inventory. They announced that, in one trial, the drones did as much inventory management in one day as a human can do in a month.

The stork-like delivery service would drop a package at your doorstep with a mini-parachute attached.

Walmart aims to stay ahead of the game in the latest shopping trends by opening a resale store, as well as streamlining their delivery service with automated delivery pods and restocking refrigerators while people aren’t home.

Agriculture
3 ways autonomous farming is driving a new era of agriculture
Could autonomous tractors, drones, and seed-planters fill the growing labor shortage in the agricultural industry?
By Kayleigh Bateman

Climate Crisis
Digital technology can cut global emissions by 15%. Here’s how.
The grand challenge for humanity is to ensure that groundbreaking technologies have a clear purpose for our planet.
By Johan Rockström and Börje Ekholm 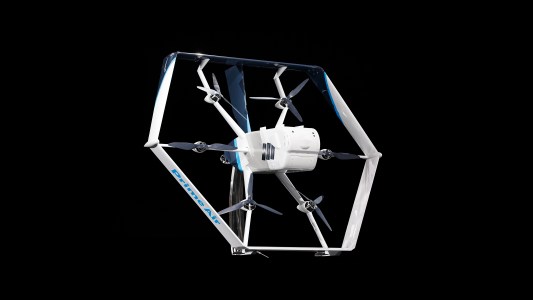 Drones
Amazon drone delivery gets approval to launch from FAA
By Kristin Houser
Subscribe to Freethink for more great stories
Subscription Center
Sections
Video
Freethink
Subscribe
We focus on solutions: the smartest people, the biggest ideas, and the most ground breaking technology shaping our future.
Subscribe