The Wright Brothers’ first flying machine took its design cues from pigeons, and a Swiss engineer invented Velcro after noticing how burrs stuck to his dog’s fur.

Copying nature to solve human problems is known as biomimicry, and the next creature to make an impact on engineering could be an almost-uncrushable bug, with a badass name: the diabolical ironclad beetle.

The diabolical ironclad beetle can survive being crushed by something 39,000 times its own weight. Imagine 7.8 million pounds — more than 10 jumbo jets — crashing down on a 200-pound person, and you’ll get an idea of what the insect can handle.

This is thanks to a remarkable exoskeleton that also makes the insect practically inedible to most predators — it just plays dead until they give up and leave it alone.

The diabolical ironclad beetle is far from the only bug with an exoskeleton, though, so scientists have long wondered what makes its armor so much more resilient than others.

Now, a team led by researchers from University of California, Irvine, and Purdue University may have cracked the case — with the help of a Toyota Camry and a 3D printer.

The first step to figuring out what makes the diabolical ironclad beetle so tough was pushing that toughness to the limit.

That process started with the researchers running the beetle over with a car. Twice.

When that wasn’t enough to kill it, they conducted compression tests, literally pushing down on the beetle with steel plates until its exoskeleton finally gave way (that happens at the 24-second mark in the below video and is as brutal as it sounds).

That’s how they determined that the beetle could withstand a sustained applied force of 150 newtons — more than twice as much as any other terrestrial beetle they tested.

The next step was figuring out why the diabolical ironclad beetle can withstand such force.

Some creatures, including certain types of snails, incorporate minerals, such as iron, into their shells for extra durability, but when the researchers studied the composition of the beetle’s exoskeleton, they found it was entirely organic.

That led them to suspect that the bug’s toughness has more to do with structure than composition.

Using computer simulations and 3D-printed models, the researchers discovered that the beetle’s exoskeleton is made of several thin layers of material, with interlocking segments that fit together like pieces of a jigsaw puzzle.

These features are what allow the diabolical ironclad beetle to withstand such a tremendous amount of force. Instead of breaking, the layers start to separate, absorbing the force. Catastrophic failure is avoided, and the bug’s soft insides remain unsquished.

Biomimicry and the Bug

The researchers are already looking for ways to use what they’ve learned about the diabolical ironclad beetle to solve modern engineering problems.

“We’re pretty stoked, because we think we can go to aircraft, automotive, sporting good industries with this kind of design,” researcher David Kisailus told Wired.

They’ve already conducted at least one experiment focused on the aerospace industry.

We may be able to shift from using strong, brittle materials to ones that can be both strong and tough.

For it, they connected two plates — one made of a carbon-fiber composite and the other aluminum — using a fastener common in aerospace engineering.

They then made a carbon-fiber plate with layers (like the beetle’s exoskeleton) and joined it to the aluminum plate using a similar jigsaw puzzle-like design.

When they pulled the plates apart, the one with the fastener “failed catastrophically,” according to Kisailus. The beetle-mimicking design, however, did not — instead, the layers of the carbon plate started separating just like those of the beetle’s exoskeleton.

“This work shows that we may be able to shift from using strong, brittle materials to ones that can be both strong and tough by dissipating energy as they break,” researcher Pablo Zavattieri said in a press release. “That’s what nature has enabled the diabolical ironclad beetle to do.” 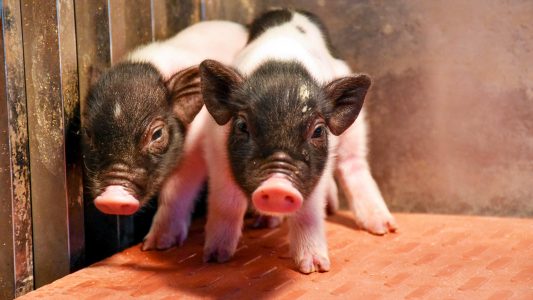 These gene-edited pigs have organs designed to be more compatible with the human body, bringing xenotransplantation one step closer to reality.