A Facebook robot that wraps fiber-optic cable around existing power lines could help bridge the digital divide by bringing internet access to some of the billions of people who currently lack it.

Why it matters: The 60% of the world population with internet access has social, economic, financial, and educational advantages over the other 40%, most of whom live in developing nations or rural areas.

The cost of expanding internet networks is a major barrier to bringing internet access to those people — if the Facebook robot can cut that cost, it could help close this “digital divide” and make the world a more equitable place.

The 60% of the population with internet access has many advantages over the other 40%.

The challenge: One way to deliver internet access is through fiber-optic cables, which are typically buried underground or hung from existing power lines.

The former option is more stable — no need to worry about bad weather knocking out access — but it’s also more expensive.

Hanging cables from existing power lines, meanwhile, requires installers to commit to time-consuming “make-ready work” — this involves surveying and upgrading utility poles to make room for the new cables and is often the costliest part of the process.

Wrap it up: In the 1980s, telecom companies in the U.K. and Japan started toying with a novel idea: instead of burying or simply hanging the fiber cable used to deliver TV and phone service, they could use machines to wrap the cables around existing power lines.

“Since the fiber cable is wound around a supporting conductor, it is not necessary to make a new space on the pole or pull it at a high tension,” Facebook engineer Karthik Yogeeswaran wrote in a blog post. “This obviates the need for expensive, time-consuming make-ready work.”

As Yogeeswaran told CNET, the idea never really caught on commercially, though.

“[T]hat was partially because it was built using ‘80s technology,” he explained. “You had gas-powered motors and they kind of relied on humans moving these things across obstacles. You had to shut the power off.”

A second look: Yogeeswaran saw potential in cable-wrapping as a way to expand internet access while keeping costs low, so he set out with his team at Facebook Engineering’s Connectivity Lab to see if they could make it work using 21st century tech.

“In most of the world, medium-voltage power lines pass down almost every street,” he said. “If we could find a way to add fiber to those power lines, we would have a solution that could be applied globally.”

The Facebook robot: Because those medium-voltage lines are thinner and weaker than high-voltage lines, Facebook’s first goal was developing a fiber optic cable that would be lighter than the ones typically used above ground, but just as robust.

Once they succeeded at that, they teamed up with ULC Robotics to design a robot light enough to install the cable on medium-voltage power lines.

That robot is Bombyx. It’s still a prototype — Facebook wants to make the robot completely autonomous instead of semiautonomous, like it is now — but you can see the bot in action via a newly released video.

Expanding internet access: Facebook believes Bombyx has the potential to “dramatically reduce” the cost of installing fiber internet, but it doesn’t plan to actually manufacture and deploy the robot itself.

Instead, it’s licensing the tech for free to other companies. Its first partner in the endeavor is San Francisco’s NetEquity Networks, and while Facebook doesn’t know what NetEquity’s plans are for the bot, it’s hopeful they’ll include bringing internet access to more people in the U.S.

“It’s really going to be up to our partners and their interests of where they want to deploy the technology globally,” Yael Maguire, VP of engineering at the Connectivity Lab, told CNET. “If there’s interest in deploying it in the United States, we’d obviously be absolutely thrilled.” 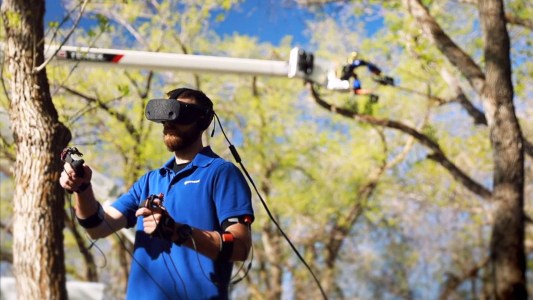 A robot avatar that mimics the motions of a human controller could take the place of workers in dangerous jobs by the end of 2022.