While the first step may be the hardest in many ventures, the last mile is the one that causes the most problems in transportation and shipping networks.

While vast networks of ships, trains, and trucks easily connect major hubs, allowing for most anything to be sent around the globe at low cost, delivery to an individual customer, the “last mile” of the journey, is typically carried out in a separate, small vehicle that can only serve so many people per trip.

These house-to-house deliveries are slow, labor intensive, and less efficient, making the last mile cost as much as the rest of the trip combined.

There have been many attempts to solve the problem, with mixed results. Some companies, like Amazon, are trying to address it by introducing centralized pickup locations.

House-to-house deliveries are slow, labor intensive, and less efficient, making the “last mile” cost as much as the rest of the trip combined.

Others are trying to shift the problem to robots. This trend towards automating the last mile recently got a boost from new delivery robots from the Polytechnic University of Catalonia (UPC) and CARNET. Unlike many other robots, these can go up flights of stairs.

The prototype “Autonomous Delivery Device” (ADD) was announced in a press release from UPC. The delivery bots will soon begin operating as part of a pilot program in three cities in Spain, Germany, and Hungary.

This mobility is key since urban environments are more complex than you might imagine. Local regulations on where delivery vehicles can travel vary; conditions on the ground can impact whether your package can get to you; a normally open route might be blocked on any given day.

The ability of these autonomous vehicles to go where cars cannot — and where only human feet have gone before — may allow them to operate more far efficiently than conventional delivery setups.

If they are effective, they could dramatically lower shipping costs. A considerable amount of the cost of shipping is found in this last mile: some estimates put it around 40% of the entire cost, but others have it over 50%. So even a moderate improvement over current methods would be noteworthy.

Beyond the value of faster and cheaper shipping, the researchers also note that more than a fifth of air pollution in cities is caused by shipping over the last mile. The electric-powered ADDs could also resolve that problem.

Special delivery: These robots aren’t the only attempt to solve the last mile problem using machines. Alibaba, the Chinese online retail company, has been using delivery robots for a while now. Other examples, like Amazon’s drones or the bots used by Coco, also make some deliveries and are less shocking to see than they used to be.

Of course, getting approval for a small air force of drones is difficult, and the ADDs benefit from being ground-based.

The last mile problem is a tremendous expense and causes more than a few headaches for those working in logistics. While outsourcing the problem to robots won’t bring costs down to zero, they could help keep cities a little cleaner, get goods to you a little faster, and do it more efficiently than drivers in cars and trucks.

Exactly how a robot will go about hiding a box so porch pirates don’t steal it seems to be undetermined, but I am sure that’ll be resolved during the pilot program.

AI
Microsoft plans to use ChatGPT in Bing. Here’s why it could be a threat to Google.
Language models could transform the ways we engage with search engines. 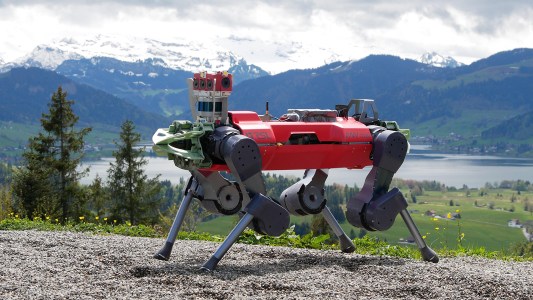 Robotics
Robot dogs are hiking the Alps and preparing for space
Subscribe to Freethink for more great stories
Subscription Center
Sections
Video
Freethink
Subscribe
We focus on solutions: the smartest people, the biggest ideas, and the most ground breaking technology shaping our future.
Subscribe