Lithium is an essential component of most rechargeable batteries, powering everything from iPhones to Teslas. However, increased lithium mining due to rising demand will deplete known land-based supplies by 2080.

A team of scientists at King Abdullah University of Science and Technology, in Saudi Arabia, says they already have a solution in the works: before land-based lithium runs out, shift lithium mining to the ocean. The team claims they’ve created an affordable method for extracting lithium from the seawater, potentially unlocking a practically infinite supply of lithium.

The challenge: Land-based lithium mining is incredibly damaging to the environment, and it wastes huge amounts of water — up to 500,000 gallons of water per ton of lithium extracted.

Seawater contains 5,000 times the amount of lithium found on land, but only in very low concentrations, which has made previous attempts to extract lithium from the ocean ineffective.

What they did: The team, led by Zhiping Lai, took a unique approach to lithium mining, explained in a paper in the journal Energy & Environmental Science. They created an electrochemical cell, containing a ceramic membrane made from lithium lanthanum titanium oxide (LLTO). It sounds like a mouthful, but you can think of it as a simple mesh that filters out lithium.

The cell’s crystal structure has tiny pores. As a result, lithium ions can travel through gaps in the membrane, while bigger metal ions are blocked.

Inside the cell are three chambers. First, the seawater flows into a central feed chamber, where the positive and negative ions are separated. Then, positive ions move through the LLTO membrane into a side chamber, while negative ions exit into a separate third chamberThen, the lithium-concentrated water is fed through the system again.

With each processing cycle, the lithium concentration gets higher and higher, the team explained in a statement.

The final touch was a slight adjustment to the solutions’ pH, ensuring the final lithium solution barely had any traces of other metals. This made sure the final product was pure enough to fulfill the specifications of battery makers, reports Mining Dot Com.

Is it economical? The system can’t replace lithium mining yet. The process has only seen early tests and has to prove it can scale, but the team says it could eventually become cost-effective.

They conducted an economic study and concluded that if power costs $65 per MWh (close to the average for businesses in Saudi Arabia), the process would only require $5 of electricity to extract 1 kilogram of lithium from saltwater.

The process may not be ready for prime time yet, but if the price of lithium spikes, expect battery makers to look to the sea. 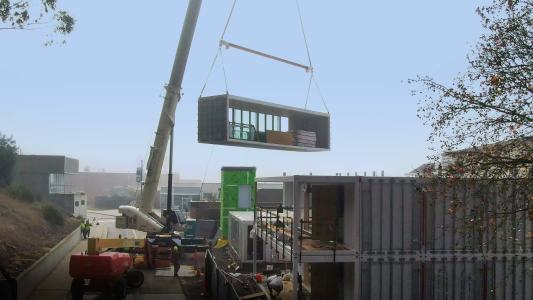 Series|Hard Reset
Do buildings have to be permanent?
8:06
By Jack Berning
Subscribe to Freethink for more great stories
Subscription Center
Sections
Video
Freethink
Subscribe
We focus on solutions: the smartest people, the biggest ideas, and the most ground breaking technology shaping our future.
Subscribe