When it comes to virtual worlds, one of the most challenging things to create (rivaling real trees, which Eric Ramberg, Chief Content Officer at Quixel, wrote is “the most requested type of asset”) is realistic human characters — especially their faces.

But Epic Games may have created the best solution so far. They have released a new character creation tool in Unreal Engine, called MetaHuman Creator, that helps you render an almost endless selection of near-photorealistic digital people.

“Up until now one of the most arduous tasks in 3D content creation has been constructing truly convincing digital humans. Even the most experienced artists require significant amounts of time, effort, and equipment, just for one character,” said Vladimir Mastilovic, VP, Digital Humans Technology at Epic Games. “That barrier is being erased through Unreal Engine, and we’re thrilled to introduce MetaHuman Creator.”

Just take a look. These aren’t real humans, I swear.

These characters were created in the cloud-hosted service, MetaHuman Creator — an app where users can mix and match feature options, like hairstyles, skin tone, and eye shape (like a hyper-realistic Mr. Potato Head), and fine-tune the nitty-gritty.

What makes MetaHuman stand out from the rest is the high level of accuracy. Watching the characters move, the shadows and wrinkles on their skin are incredibly realistic and subtly move as the character talks or blinks. The hair also moves naturally, seemingly like each strand is rendered individually. With tousled hair, patchy beards, and porous skin, the details are convincing.

In this next video, Epic demonstrates how versatile MetaHuman is, starting with a preset character, an older man, and tweaking and adjusting the details until they have created a young woman.

Users can adapt cheekbones, change the shape of the nose, and reposition the eyes. You can even change how deep you want facial wrinkles to be — if only we could do that in real life. Watching the playback, one quickly forgets these characters aren’t actually people.

“The details of a human’s face are incredibly intricate, and we pay attention to those details,” says Derek Rowe, immersive filmmaker and Creative Director of NatureXR. “In virtual environments, if there is a person, we are wired to look at their face and their body language.”

The cloud-based app allows you to create a MetaHuman, with built-in programming to create lifelike movements and expressions, in your browser without having to download software. This is especially useful for people who have a slower computer, and instead, you can work on the powerful servers in the cloud.

When you’re finished sculpting your modern Frankenstein monster, you can download it to the Unreal Engine desktop app — instantly ready for 3D animation.

The full program isn’t available yet — it should be ready later this year. But, for now, Unreal Engine is letting us play with two character samples.

Making video games has grown increasingly costly — up to hundreds of millions of dollars per game. And, since creating people takes a lot of time, this human creator could save game developers a boatload in time and money — if it is as simple and effective as the early release videos show.

“When (clients) find out how much work it takes and how much money it costs to animate people in realistic enough ways that are valuable, they pull back and ask if there are ways we can do it without people,” says Rowe. “A lot of the products that you see today coming to aid any kind of development is focused on saving people time. I think MetaHumans is no different; it allows all creators regardless of their budget to have hyper-realistic humans in their virtual project.” 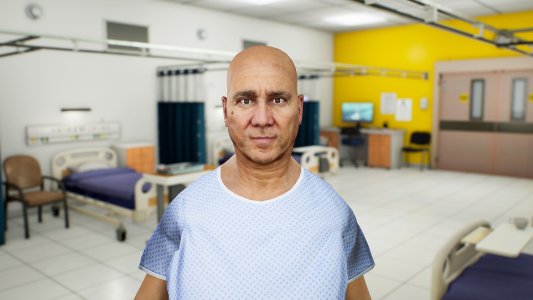 The Virti platform lets doctors and med students interact with computer-generated virtual patients so they can improve their bedside manner.