Now, an augmented reality (AR) companion app for the movie is taking those creatures out of the museum — and putting them into people’s homes.

After downloading the Museum Alive AR app, iPhone users can watch three animated scenes seemingly come to life on any flat surface in their home.

Each animation highlights a different extinct creature — a saber-toothed Smilodon tiger, a five-eyed Opabinina arthropod, or a flying Dimorphoson dinosaur — in its natural habitat, with Attenborough providing narration.

As the scene plays out, you can move your phone around to see different angles or keep an eye on the Dimorphoson as it flies around your living room.

In addition to the AR scenes, the Museum Alive app features photos and videos from the Attenborough archives, as well as informative blurbs about the three creatures.

The AR app is a combination of education and entertainment — exactly what you’d expect from Attenborough — and could be a way to scratch your history museum itch while social distancing.

The Museum Alive AR app is currently available for iPhone via the App Store for $2.99, but there’s no word on whether it’ll be released for Android. However, a fourth AR scene featuring a dodo is reportedly in the works for any fans of flightless birds. 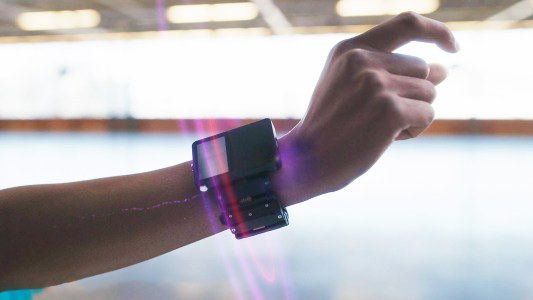 A neural wristband that allows wearers to control AR glasses by simply moving their fingers is under development at Facebook Reality Labs.