More specifically, the startup aims to develop a system that could be implanted into the human brain to allow it to communicate directly with electronic devices, a type of tech known as a brain-computer interface (BCI).

Now, the company has taken another step toward that goal, by demonstrating that its brain implant can read the neurons firing in a pig’s brain in real-time.

BCIs already exist — some people use them to move paralyzed limbs or control prosthetics with their thoughts — but these are highly specialized, experimental devices.

Neuralink’s goal is to create a BCI that would be easy to implant and use and, like the devices currently being tested in humans, its initial target demographic is people with brain or spine problems.

“(Neuralink) will ultimately be used to make up for entire lost sections of the brain due to stroke/accident/congenital,” Musk tweeted in February. “Don’t want to get too excited, but the potential is truly transformational for restoring brain & motor functions.”

The longer-term goal is a brain implant that anyone could get — the surgery would be as safe and painless as vision-correcting LASIK, Musk said during a July 2019 launch event for the company.

The newly created cyborg could then tap into machines with their mind — and the potential applications for that range from the relatively mundane (add calendar events to your smartphone with a thought) to the cool (stream music right into your brain) to the downright mind-blowing (harness AI systems to super-charge your intelligence).

On August 28, Musk hosted a live-streamed Neuralink update highlighting a new milestone along that path: pig recipients of the brain implant.

During what Musk called the “three little pigs demo,” a trio of pigs was brought into pens. One had never received an implant, one had an implant that was later removed, and one currently had an implant.

You can see the neurons will fire…that’s what’s making the beeping sound.

The first two pigs, Joyce and Dorothy, appeared largely indistinguishable — they both acted the same, gobbling treats from their handlers and mugging for the cameras.

After some coaxing, the third pig, Gertrude, finally entered her pen. A screen above it then displayed what Musk claimed was real-time brainwave data collected by the 1,024-electrode implant placed in her brain two months prior.

“If she shuffles around, touches her snout to the ground, or you feed her some food — pigs love food — you can see the neurons will fire much more than when you’re not touching the snout, and that’s what’s making the beeping sound,” he said.

He also showed a video of a pig walking on a treadmill, claiming that the company was able to use the animal’s brain implant to predict the position of its limbs “with very high accuracy.”

The pigs weren’t the only thing on display during the live-streamed event — Musk also unveiled the robot Neuralink is developing to do the actual implantation of its devices.

However, the company has yet to release any scientific papers on the new devices or the pig studies (in 2019, it did publish a white paper detailing rat studies of its tech).

Until new data is released and peer-reviewed, it’s hard to know exactly how much weight to give Musk’s claims.

Hopefully, the scientific data on Neuralink’s latest achievements is forthcoming — but even Musk himself acknowledges that the ultimate destination of merging humans with AI is a long way away.

“There’s a tremendous amount of work to be done to go from here to a device that is widely available and affordable and reliable,” he said at the closing of the demonstration. 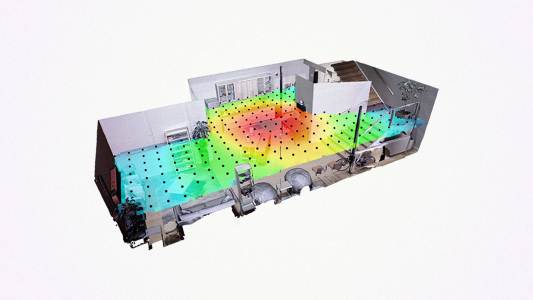 Facebook’s AI lab has released new tools for its embodied AI training platform, including one to train a home robot to respond to sounds.

Robotics
Training a home robot to see — and hear
Subscribe to Freethink for more great stories
Subscription Center
Sections
Video
Freethink
Subscribe
We focus on solutions: the smartest people, the biggest ideas, and the most ground breaking technology shaping our future.
Subscribe