Neuralink just demonstrated its surgical robot for the first time, showing the world during a livestreamed event how the bot could swiftly and precisely insert electrode-packed threads into a dummy brain.

In 2019, Musk revealed that the company was working on a robot to perform the implantation surgery, and during a livestreamed “show and tell” event in 2020, the company gave the world its first look at the Neuralink robot.

“We ultimately want this robot to do essentially the entire surgery — so everything from incision, removing the skull, inserting electrodes, placing the device, and then closing things up,” Musk said at the time. “We want to have a fully automated system.”

The Neuralink robot: On November 30, Musk hosted another “show and tell” livestream.

This time, the company gave viewers their first look at the Neuralink robot in action, demonstrating how it could insert 64 threads containing 16 electrodes each into a gelatinous “brain proxy” of a dummy patient over the course of about 15 minutes.

“It’s capable of maneuvering these tiny threads — they’re only on the order of a few red blood cells wide — and inserting them reliably into a moving brain while avoiding vasculature,” said DJ Seo, Neualink’s VP of Implant. “It’s quite good at doing this reliably.”

“Imagine taking a hair from your head and trying to stick it into Jell-o covered by Saran Wrap.”

Neuralink has yet to automate other parts of the surgery, but the thread insertion was a logical place to start, since it would be the hardest part of the process to do manually, according to Christine Odabashian, leader of Neuralink’s hardware insertion team.

“Imagine taking a hair from your head and trying to stick it into Jell-O covered by Saran Wrap and doing this at a precise depth and position and doing this 64 times within a reasonable amount of time,” she explained.

Now, the company can focus on automating the rest of the procedure — during the livestream, Odabashian compared the expected progress on the Neuralink robot to that of the systems used to perform laser eye surgery over the past 30 years.

Beyond the bot: In addition to the Neuralink robot demo, the “show and tell” also included the news that the company intends for its first two applications to be helping people with paralysis use their tech devices and restoring eyesight in people who’d lost theirs.

Musk also said that his company is in the process of submitting paperwork to the FDA to start human trials. The goal is to begin those in about six months, according to the CEO — though it’s worth noting that he has previously predicted trials would begin in 2020 and 2022.

Still, Neuralink appears to be making progress, and while it’s easy to be skeptical of Musk’s timelines, it’s equally easy to imagine how much better the world will be if the company can get its tech to work as envisioned. 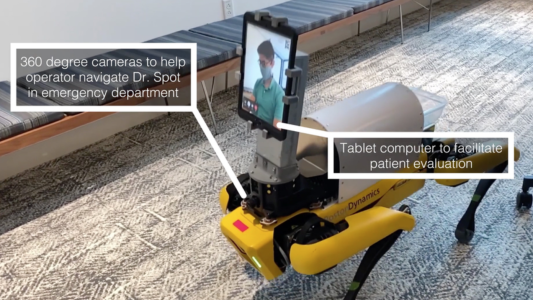 Study finds patients are receptive to interacting with robots designed to evaluate symptoms in a contact-free way.