The biotech startup Apeel Sciences is aiming to radically cut food waste with a new plant-based spray that reinforces plants’ natural peels and skins. Lab tests show that the product quadrupled the edible lifespan of avocados, and now those are hitting shelves at Costco supermarkets across the midwest.

Apeel has created versions of the product to extend the shelf life of strawberries, tomatoes, cassava, and dozens of other foods. If it catches on, technology like this could transform the global food supply chain.

Nobody Wins from Waste

As much as half of all produce gets tossed between farm and fork, according to some estimates. This staggering waste happens at every step on the food chain, from harvesting down to home refrigerators, with millions of tons of rotten fruits and veggies dumped in the trash.

The inefficiency means twice as much farmland needs to be tilled, watered, and fertilized to get the same amount of produce. Fruits also have to be harvested early to give them enough time to make it down the supply chain, and this comes at the cost of growth, nutrients, and flavor they’d get from more time on the vine. Expensive refrigeration systems are needed in storage facilities, trucks, and grocery stores, and workers have to continually monitor and pull bad produce from the shelves.

Of course, even when it makes it home, we all know how fast fresh stuff goes bad—according to food activists, food tossed at home accounts for 43% of all waste. All of this drives up costs for farmers, stores, and consumers (and it takes a toll on the environment, too).

Apeel prevents food decay with a plant-derived coating that mimics the fruit or veggies’ natural skin. The coating is extracted from the fatty compounds (lipids and glycerolipids) found in plant peels, which create the natural barrier that keeps moisture in and oxygen out. The clear, odorless, tasteless liquid is then applied to the skin of (say) avocados, reinforcing the peel and managing the dehydration and oxidation that causes them to shrink, rot, and go moldy.

According to Apeel, the preservative is completely safe and indistinguishable from natural plant compounds, and it can be used on USDA Organic foods. (That’s especially great news because organics generally spoil faster than conventional foods.)

Apeel promises to double shelf life in stores and (just as important) give consumers more than the micro-second of ripeness that avocados seem to have before they go bad. The stuff is not cheap, but their value proposition claims that the reduction in waste and spoilage more than offsets the cost. “The way we’re set up,” Apeel CEO James Rogers told the Washington Post, “it’s more expensive for them not to use the product.”

Plus, if the technique becomes widespread, food could grow longer on the vine, making it tastier and more nutritious. Apeel is also working on rolling out the preservative in developing countries, where refrigeration is rare and spoilage takes a huge bite out of farmers’ incomes.

You can check out their mesmerizing time-lapse video of fruit decay with and without the Apeel coating here. 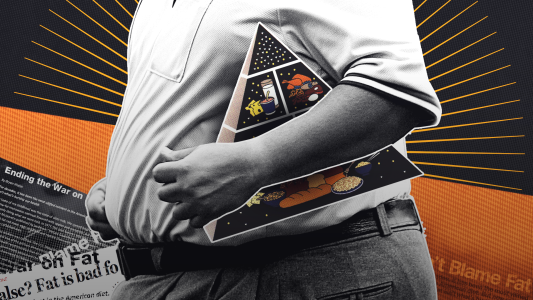 To address rising health problems in the 1980s, scientists and policymakers developed the US Food Pyramid to…

Series | Wrong
Did the food pyramid make us fat?5:07
Subscribe to Freethink for more great stories
Subscription Center
Sections
Video
Freethink
Subscribe
We focus on solutions: the smartest people, the biggest ideas, and the most ground breaking technology shaping our future.
Subscribe