Researchers have discovered a way to turn any old sponge into an oil spill cleanup machine that selectively absorbs oil without harming wildlife — a game changer for cleaning up oil spills.

Thankfully, massive oil spills — like the 2010 Deepwater Horizon disaster that emptied 210 million gallons of oil into the Gulf of Mexico  — don’t frequently happen. Still, smaller spills aren’t uncommon. Thousands occur each year in U.S. waters, spilling as little as a barrel of oil or less.

However, current oil spill cleanup methods often contribute to the environmental damage that’s already been done by the spill. And, these methods can be expensive.

Currently, there are three main ways to clean up an oil spill: burning, skimming, and chemical dispersants, all of which were used to clean up the Deepwater Horizon oil spill.

But each of these methods has its own problematic side-effects. Burning the oil off the surface of the water releases more carbon into the atmosphere.

And chemical dispersants, which are sprayed on the surface to break the oil into smaller, sinking drops, are toxic to marine life. According to a Georgia Institute of Technology study, Corexit, the chemical dispersant used for the Deepwater Horizon oil spill cleanup made the disaster 52 times more toxic than the oil spill alone.

A Cheap Sponge Could Be More Effective

But a new magnetic sponge could resolve all those challenges.

The sponge’s secret lies in a special coating that allows it to attract oil and resist water. The three-dimensional structure of the coating selectively binds to oil, drawing it out of the water and trapping it. This is designed to leave clean water and the surrounding marine life unaffected.

The researchers tested the sponge on different crude oils of varying densities and viscosities, finding consistent results. Even in simulated turbulent waters, the sponge released less than 1% of the oil back into the water. Their work was published in the journal Industrial Engineering and Chemical Research.

Importantly, the sponge can hold up to 30 times its weight in oil and doesn’t release additional toxins into the environment. It can also be reused many times over, making it a cheaper alternative. Even the oil-soaked up into the sponge can be squeezed out and resold back to the company that caused the spill, making the oil spill cleanup process more cost-effective.

The Northwestern team isn’t the first to look for new ways to clean up oil, or consider magnetic nanomaterials. Researchers from the Argonne National Laboratory and University of Calgary in Canada have also developed non-toxic, oil-absorbing sponges.

The Northwestern researchers are currently in talks with the U.S. Coast Guard, and Schmidt Marine, a leading developer of ocean technologies, for opportunities to scale up their project.

“We believe we can address a giga-ton problem with a nanoscale solution,” said Vinayak P. Dravid, the lead project engineer at Northwestern. 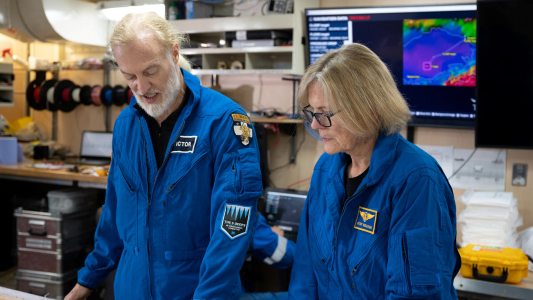 Oceans
The first person to reach space and Challenger Deep
By Kristin Houser
Subscribe to Freethink for more great stories
Subscription Center
Sections
Video
Freethink
Subscribe
We focus on solutions: the smartest people, the biggest ideas, and the most ground breaking technology shaping our future.
Subscribe