We’ve covered some really cool bionic technology as part of our Superhuman series, but one thing we haven’t talked about is how much this technology costs. You can’t order Johnny’s arm online (or anywhere else at the moment), but if you could, the cost would be right around what you’d pay for a 2016 Ferrari California T. The ReWalk exoskeleton, which you can buy, would cost roughly as much as a 2016 Audi A6 TDI.

While there are other exoskeletons on the market, none of them costs less than a motorized wheelchair, and no bionic arm currently available costs less than a basic upper extremity prosthetic. This has disability advocates rightfully wondering how disabled people can possibly afford the technology that promises to improve their lives.

There are reasons to be hopeful that assistive technology prices will come down.

For one thing, that’s what happens with all technology. Everybody knows that cell phones in the 1980s were four-figure luxury purchases, while today, it’s hard to find someone who doesn’t have a smartphone. Computer memory provides an even more striking example. In 2003, a one gigabyte USB flash drive cost just over $8,000. Today, you can buy one for just under $3. Never mind that no one buys data storage in such small quantities anymore, just think about that price change! It’s incredible.

Prices decline as manufacturers recoup their research and development costs and refine and scale up their production processes. Those things can’t happen without consumer demand.

Right now, it’s hard to imagine assistive technology prices declining as rapidly as those for flash drives, because the exoskeleton market is smaller than the data storage market and there’s no reason to expect a dramatic increase in the number of people who need new arms or mechanically assisted legs.

And that brings us to the first reason I think assistive tech prices will eventually come down:

Bionic technology is going to expand beyond the disability market

Have you seen the pictures Hyundai released of their new exoskeleton prototype?

That guy doesn’t have a spinal cord injury. Here he is standing on his own just fine. What he’s demonstrating is that the same tech that can help a paraplegic person stand and walk can help an uninjured person lift things they shouldn’t be able to lift. And that means we’re probably going to see supraphysiological applications of bionic technology in the near future. Hugh Herr, co-director of the Center for Extreme Bionics at MIT, believes using bionics–especially when we don’t “need” them–will become a common practice. I’m inclined to agree. That’s what the biohacking movement is about. Heck, it’s why people take vitamins. Everybody wants to be better. The only thing stopping us is social buy-in (will people laugh at me if I show up to the company softball game in a mech suit?) and the price point (will my spouse leave me if I take out a second mortgage to buy a mech suit for the company softball game?). But if there ends up being a consumer market for mech suits, it won’t be weird to wear them and it won’t cost a fortune to buy them.

But let’s say we’re getting ahead of
ourselves with the idea that one day
soon, everyone will own a
performance-enhancing bionic apparatus.
We’re still likely to see them used in
industries like construction, mining,
and product assembly.

But let’s say we’re getting ahead of ourselves with the idea that one day soon, everyone will own a performance-enhancing bionic apparatus (which they’ll park next to their Tesla outside their lunar condo). We’re still likely to see them used in industries like construction, mining, and product assembly, which will not only drive the price down, but incentivize still more research and development.

And we haven’t even gotten to the baby boomers. There are a lot of them and they’re going to live forever. It’s hard to imagine America’s wealthiest generation saying no to technology that keeps them mobile and independent.

Another reason to be hopeful is that the open-source philosophy is alive and well in the assisted tech community. OpenBCI, the company that makes 3D-printed headsets for tracking and utilizing brain activity, is open-source and so is the Applied Physics Lab at Johns Hopkins University, which developed Johnny’s arm. That means more cooks in more kitchens coming up with crazy new ways to use bionic technology that very few people had access to just a decade ago. It also means R&D costs are more dispersed than if these were closed platforms.

3D-printing can lower the cost of production

Ryan Hines can’t afford the most advanced robotic technology currently available for people with his congenital disability, so he made his own. And the reason he was able to do that is because the cost of 3D printing has gone way, way down.

Prices have dropped low enough that someone like Ryan–who designed his own assistive self-feeding technology using a CAD program–doesn’t have to buy a 3D printer. He can just send the design to someone else, and have it printed for a fraction of a fraction of what companies paid 20 years ago to have prototypes made.

We can’t know when the price point will come down

But we know that it will, because that’s what has always happened. TVs get cheaper, phones get cheaper, storage gets cheaper, everything gets cheaper. Even things that seem like they don’t cost less–like cars–now come standard with what was once considered luxury technology. Power steering! Air conditioning! Cruise control! These things cost a fortune to develop. Who honestly sees them as luxuries today?

The prices won’t fall as fast as we
want–or as fast as many people need
them to–but they will fall.

The prices won’t fall as fast as we want–or as fast as many people need them to–but they will fall. And one day, someone will remind us that bionic arms and exoskeletons used to cost a fortune, and we just won’t believe it. 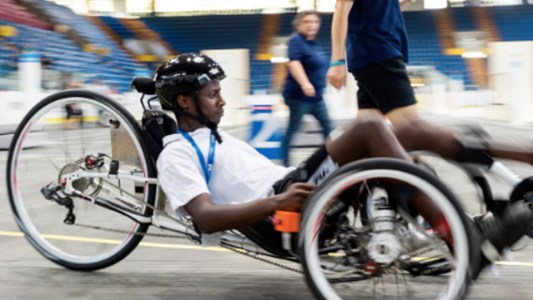 The event will seek to answer one of the most interesting technology questions of the early 21st century: How close…

Bionics
What to expect at the first Cyborg Olympics
Subscribe to Freethink for more great stories
Subscription Center
Sections
Video
Freethink
Subscribe
We focus on solutions: the smartest people, the biggest ideas, and the most ground breaking technology shaping our future.
Subscribe