There is no doubt about it: the world needs a cheap, sustainable, clean energy source — and solar power seems prime for the job. But nighttime, atmosphere, and clouds block sunlight from reaching Earth most of the time, thwarting the best of the sun’s potential. If solar power were to replace fossil fuels, it may also need to be harnessed at night or on cloudy days. Scientists are on it.

Researchers at the Air Force Research Laboratory in Albuquerque, New Mexico, are planning to collect solar energy in outer space and laser-beam it back to earth.

The $100 million project is known as the “Space Solar Power Incremental Demonstration and Research” project — SSPIDR (pronounced “spider”) for short. The plan is to create a self-assembling solar array that can fold into a capsule and be launched into space. Once in space, acres of solar panels will unfold, collect solar energy, convert it to radio waves, and then beam it to receiving stations on the ground, which can add power to the grid.

Half of the Earth is always covered in darkness, and 67% is typically blanketed in clouds. Remove those obstructions — clouds, atmosphere, and nighttime — and you have the most efficient place to collect solar power: outer space. Space-based solar panels continuously have an unobstructed view of the sun.

One of the motivations for this project is the opportunity to provide remote military outposts, sometimes in hostile regions, with the power they need.

“With our technology, if we prove it feasible, we could just beam power to them. All they have to do is set up a rectenna” — a special type of receiving antenna — “and they would have power. It would potentially save troops’ lives,” says Rachel Delaney, a mechanical engineer at the Air Force Resource Lab.

But the pie-in-the-sky (or should we say “panel-in-the-sky”) technology is far from ready. Currently, the SSPIDR team is testing the technology in small increments — really small. Their first test utilized a solar panel about the size of a notebook — and it never left the ground. The team has since moved on to something about twice as big and designed to survive in space. It should be ready for orbit in 2-3 years.

“Going back to (that) pie-in-the-sky vision: to be able to provide meaningful power to Earth you need to get to acres of this in orbit. But no one has ever built one on the order of a meter,” SSPIDR program manager James Winter says, explaining that even their next prototype for the space solar panel will still be under a meter big.

The project presents many challenges. Not only do the solar panels need to collect energy, but somehow it has to get to Earth. Since an extension cord isn’t practical, the challenge is to beam the power back to Earth using a radio frequency that doesn’t harm animals or humans.

Another problem is in deployment. Somehow the panels need to fold and stow in a capsule that is easily deployed into space, survive launch, and work in a zero-gravity environment.

Despite the challenges, the project shows promise. Space is the only place to gain unobstructed access to the sun’s rays. Nothing will get in its way — not weather, clouds, latitude, or longitude — except for during a rare solar eclipse by the moon. And they are making incremental improvements with each prototype.

“We have a history of taking on big challenges and fielding solutions,” Winter says. 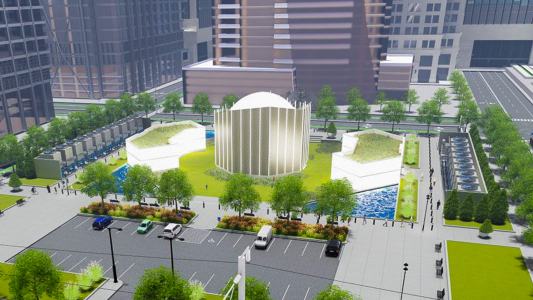 Clean Energy
Open-sourcing the blueprints for a nuclear power plant
Subscribe to Freethink for more great stories
Subscription Center
Sections
Video
Freethink
Subscribe
We focus on solutions: the smartest people, the biggest ideas, and the most ground breaking technology shaping our future.
Subscribe