Social distancing may keep sports fans out of arenas and stadiums indefinitely, but a new smartphone app aims to ensure that athletes hear the roar of the crowd when competition resumes.

The app is one half of “Remote Cheerer,” a system Japanese firm Yamaha developed in response to the coronavirus pandemic. The other half is an array of speakers positioned throughout a sports facility.

It felt like the cheering fans were right there in the stadium with me.

The idea behind Remote Cheerer is that, once live sports do resume, fans will watch the games live on the television or internet. They’ll then use the app to respond to the action the same way they would if they were in the stands.

The speakers then blast the cheers, jeers, claps, and chants at the athletes competing in the facility — helping them feel like sports fans are right there with them.

On May 13, Yamaha collaborated with two professional soccer clubs in Japan to conduct a field test of the Remote Cheerer system at the 50,000-seat Shizuoka Stadium ECOPA in Fukuroi City.

For the test, the company positioned 58 speakers throughout the stadium. It then had people in remote locations use the app to trigger built-in sounds (cheers, boos, etc.) or record and play custom audio.

The stand-in sports fans also had the option of choosing the part of the stadium from which they wanted their feedback delivered — behind the opposing team’s goal, for example.

According to Keisuke Matsubayashi, an official with the stadium company, the field test confirmed that Yamaha’s system can effectively recreate the sound of a stadium on game day.

“At one point during the system field test, I closed my eyes and it felt like the cheering fans were right there in the stadium with me,” he said in a news release. “That’s when I knew that this system had the potential to cheer players on even in a stadium of this size.”

Live Sports and Beyond

After a three-month-long delay, Japan’s professional baseball league is scheduled to kick off its 2020 season on June 19. The nation’s professional soccer league, meanwhile, is expected to resume its season within weeks of that.

Sports fans will not be allowed to attend those first games due to concerns about spreading the coronavirus, and no one knows yet when they will be able to once again enjoy live sports from the stands.

NHK World-Japan reports that Yamaha has already reached out to both leagues in the hopes of enticing them to use the Remote Cheerer. However, the company sees potential for the system to live on long after fans resume watching live sports in-person.

“We are working to promote this system as a means of delivering cheering and fan support in a wide variety of situations,” Yamaha’s Yuki Seto said in the news release.

“This includes not only spectatorless matches, but also matches with reduced spectator seating or where shouting is not possible,” he continued, “as well as accommodating fans who can’t attend matches due to being hospitalized, busy taking care of children, etc.”

Sports
The NBA’s Golden State Warriors use data to optimize the fan experience
The Warriors are using data in an attempt to deliver the best — and best targeted — fan experience possible. 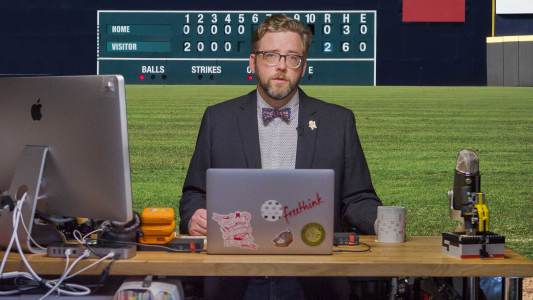 10,000 MLB employees, from players to concession stand attendees, are volunteering to help scientists study how COVID-19 has spread throughout the country.

Sports
Why the MLB antibody study matters6:40
Subscribe to Freethink for more great stories
Subscription Center
Sections
Video
Freethink
Subscribe
We focus on solutions: the smartest people, the biggest ideas, and the most ground breaking technology shaping our future.
Subscribe